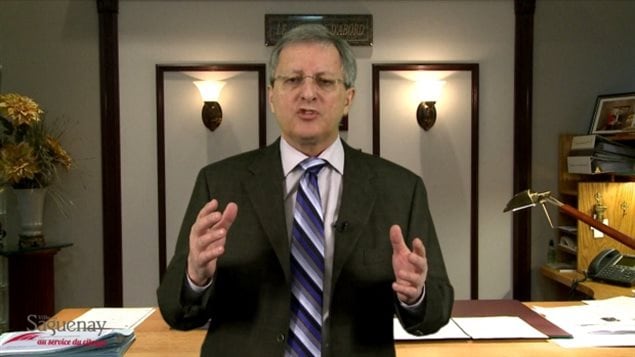 Saguenay Mayor Jean Tremblay launched a video appeal to workers to mobilize against Greenpeace and intellectuals cliaming they're costing jobs in the region (video below story)
Photo Credit: YouTube

Mayor of a Quebec town rails against “intellectuals and environmentalists”

The mainly French-speaking province of Quebec is once again making world news. But perhaps not in the way the province would like

Jean Tremblay, the mayor of the city of Saguenay posted a video message on YouTube yesterday (Tuesday) in which he called on city workers and labour unions to mobilize against Greenpeace and the intellectuals of the world. The video is going viral with over 55,000 hits in the first day.

In it he says Greenpeace and intellectuals think they’re smarter than governments, and that they will cost workers their jobs.

Loose translation- “This is call to action to our unions and workers to mobilize because if things continue like this they’ll be no more jobs for our workers. We can’t develop projects anymore. We have forests, extraordinary forests, but Greenpeace, those guys, with their diplomas and big rules, are smarter than our government that make laws and are democratically elected.  We have great projects lined up for Saguenay,— the liquefaction of natural gas, Arianne Phosphate (mining), BlackRock (mining). I’m telling you, these people will block everything, We’ll have no more jobs in the region. They’re leading us by the nose. Unions, workers, mobilize against Greenpease and the intellectuals of this world. Don’t worry, Greenpeace will still sail around everywhere in ships. But, leave us alone in Quebec. We know what the environment is, and have a great respect for nature. But we want development and that our workers have jobs ”

In an interview with the newspaper Le Journal de Quebec, shortly after the video was posted the maire said.  “It’s now become that Greenpeace that’s running the show, setting the rules. That’s terrorism!”  Not in the sense of violence but in that they come in and say if you don’t do it this way, here’s what’s going to happen.. It’s intimidation

Toss Greenpeace out his window

Earlier this week on a French-language network in Quebec Mayor Tremblay told television viewers that if Greenpeace members ever showed up at the Saguenay City Hall, he’d throw them out the window.

The mayor’s video rant was apparently in response to a statement by Resolute Forest Products (RFP) which said the future of it’s three plants in the region was “uncertain” and blamed Greenpeace for putting pressure on clients after RFP lost its Forest Stewardship  Council (FSC) environmental certification.

Greenpeace spokesman Nicolas Mainville said Mayor Tremblay has it wrong, and that he should instead put pressure on RFP to work to regain it’s certification.

The provincial representative for the region Member of the Quebec Legislative Assembly, Sylvain Gaudreault, deplored the mayor’s rant on social media. Quoted in Le Journal he said. “Management (RFP) threatens closure and continues to blackmail while everyone knows the solution is not to threaten Greenpeace but to work towards re-certification”

“It’s more silliness in his succession of blunders … he has no credibility to make a call to action when he himself refused to participate in the movement ‘Don’t touch my region,’” Gaudreault said.

CBC news also reported that the president of the CSN union for Saguenay-Lac-Saint-Jean said they will not respond to the mayor’s call to action. Le Journal reports that another spokesman for CSN at Resolute plants in Alma and Kenogami said that everyone should really be working towards RFP regaining its environmental certificate.