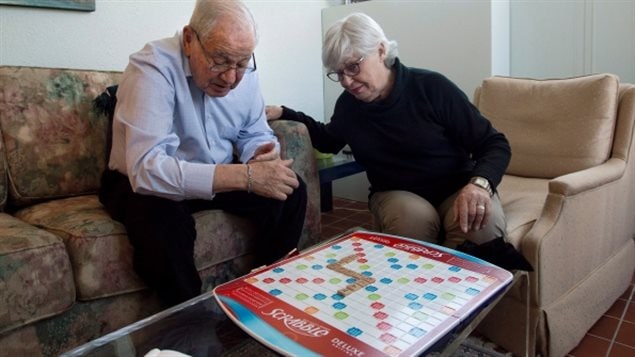 Toronto, 2013, A woman plays scrabble with her husband who has Alzheimer's. It is known that exercise and brain stimulation can help reduce or delay Alzheimer's, but a new study shows a simple test conbining thought with a physical movement can reveal the possibilty of Alzheimer's much sooner, before symptoms show, and that combining thought with movement, such as learning to play an instrument in later life can also strengthen brain pathways and delay or reduce Alzheimer's effects.
Photo Credit: Nathan Denette/Canadian Press

In other words, difficulty in combining thought and movement, i.e., concentration to produce a specific inhabitual physical movement, turns out to be difficult even for those in the very early stages of Alzheimer’s, long before any other obvious or typical signs of the disease.

Lauren Sergio (PhD) is a neuroscientist and associate professor in the school of Kinesiology and Health Science, Faculty of Health York University in Toronto

Typically, Alzheimer’s has been associated with memory loss long before any physical debility shows.

Brain scans can indicate an early Alzheimer’s problem, but they are very expensive and physicians are reluctant to authorize them without further evidence. This new testing can also indicate problems or potential problems long before other symptoms show, and do so very simply, quickly, and with very little cost.

Professor Sergio and PhD candidate Kara Hawkins, who led the study, devised the tests which although quite simple required thought to make the correct movements.

The research entitled,  Diffusion Tensor Imaging Correlates of Cognitive-Motor Decline in Normal Aging and Increased Alzheimer’s Disease Risk published in the Journal of Alzheimer’s Disease, found that 81.8 per cent of the participants that had a family history of Alzheimer’s disease and those with mild cognitive impairment (MCI) displayed difficulties on the most cognitively demanding visual motor task.

“We included a task which involved moving a computer mouse in the opposite direction of a visual target on the screen, requiring the person’s brain to think before and during their hand movements,” says Professor Sergio.

PhD candidate Kara Hawkins  said  they focussed on women as, “there is higher prevalence in this group, and also women who carry the ApoE4 gene are more vulnerable to the degradation of white matter”.

Learned routine physical movements like walking, present little problems even late into Alzheimer’s, but the experiments showed that even in the very early stages there is a difficulty in the brain to communicate thought into such a new or inhabitual action.

The test subjects with mild cognitive impairment (MCI) were easily distinguished from the control subjects, the slower reaction and movement time easily evident with the MCI or higher risk Alzheimer’s subjects.

Later brain scans of subjects who had difficulty with the tests showed early signs of potential limitations in brain signal communication between various sections of the brain dealing with thought and movement.

Professor Sergio also notes that there is an inherited factor in Alzheimers, and in some tests in their research, the adult children of Alzheimer’s patients showed indications of brain communication issues.

Professor Sergio points out this initial research should not be considered conclusive and other studies will need to follow.  The York researchers are now working on a game-type programme to use as an exercise to strengthen brain pathways.

In the meantime she says simple activities combining thinking and movements  such as learning to play an instrument, can help strengthen the brain pathways that may not be working as well as they should thus reducing the risk of developing Alzheimers.