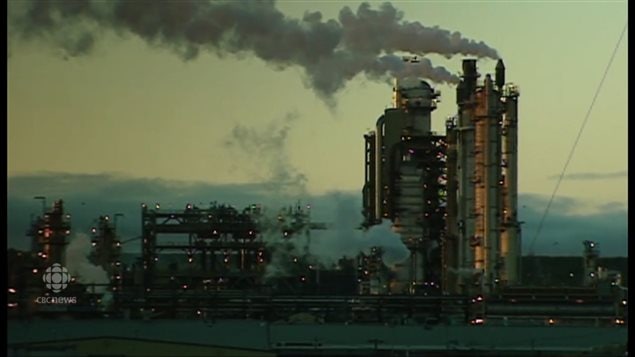 Almost three-quarters of that increase comes from the western province of Alberta, and the oilsands “are the main driver for that,” says their study. If that source of oil continues to be developed, it projects that emissions from Alberta will approach those of Ontario, Quebec and British Columbia combined. It concludes that other provinces would have to make “Herculean” efforts to try to offset Alberta’s output.

“It’s pretty clear from the numbers that essentially, continued expansion of the tarsands and their production will make it almost impossible for Canada to meet its 2020 climate change targets…or show any kind of leadership on climate change,” says Dale Marshall of Environmental Defence.

The leaders of Canada’s provinces are meeting next week to talk about climate change and an energy strategy. Marshall says they need to confront the fact that Alberta is a major of emitter of greenhouse gases, yet is not taking the kind of action other provinces have to reduce emissions.

Ontario has phased out its coal-fired electrical plant, Quebec has joined California’s cap-and-trade system, and British Columbia has instituted a carbon tax. Marshall says the federal government has been virtually absent on this file, so provincial premiers have to take the lead.

‘We need a level playing field’

“All of those leaders need to realize that we need a strategy that is cohesive, that is ambitious and that is fair,” says Marshall. “We need a level playing field for all the provinces and all the different industries so that collectively we can reduce emissions and show leadership on climate change in a way that’s fair, not penalizing any one province or another.”

Marshall notes that on Saturday, thousands of Canadians will march in the streets of Quebec City where the premiers are meeting to urge them to take meaningful action on climate change.