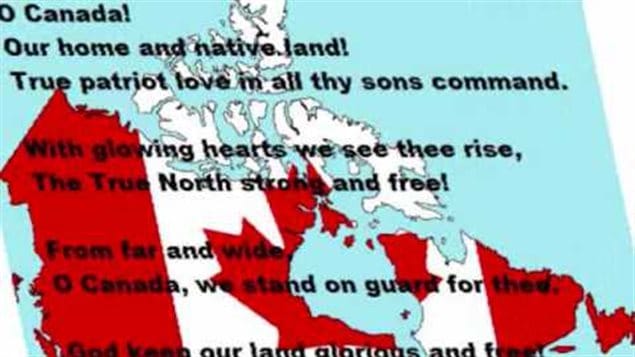 O Canada becomes the official anthem in 1980, 100 years after it was created
Photo Credit: YouTube

On this day in 1980, O Canada was performed for the first time as Canada’s official national anthem.

For most of those 148 years however, Canada didn’t really have a national anthem of it’s own.  Usually “God Save the King” and “The Maple Leaf Forever” had been sung and performed as patriotic songs and unofficial anthems.

In Newfoundland a day of celebration but also tragic commemoration

The Maple Leaf Forever, was composed with lyrics by Alexander Muir, in the year of Confederation, 1867. Although a more stirring tune,and always popular throughout most of Canada, the pro-British lyrics were always problematic and somewhat irritating to French Canadians. However, a tune originally composed and performed years later in 1880 as the “Chant national” was becoming widely known in Quebec, The melody was based on a poem by Sir Adolphe-Basile Routhier, a Quebec judge.

Though well received at it’s initial performance, it didn’t catch on immediately.

English Canada heard it possibly for the first time when schoolchildren sang it on the occasion of Duke and Duchess of Cornwall’s visit to Canada in 1901 (later becoming King George V and Queen Mary). Although a few English lyric versions had been composed, it was in 1908 that Mr. Justice Robert Stanley Weir wrote lyrics that attracted more attention, after which it too became popular across the country, (The lyrics have been adjusted over the years, with a special Joint Committee of the Senate and House of Commons making new recommendations as late as1968.)

The original “Maple Leaf forever” tree knocked down by storm

By the start of the First World War, O Canada and the Maple Leaf Forever were fairly close in popularity as patriotic songs. In the 1920’s several Canadian service organizations voted to adopt it as suitable for singing at events.

In 1927, a version with “official” lyrics was authorized for singing in schools and public functions. In 1942, when then Prime Minister Mackenzie-King was asked if Canada should now adopt an official anthem, he replied the nation had more serious things to think about during wartime. In 1964, as Canada approached it’s centennial,  a special committee was  formed to discuss the status of O Canada and God Save the Queen. At the same time the issue of a national flag was already hotly debated, and a much more contentious issue. In 1965, the acrimonious flag debate was over and Canada had it’s new flag well in hand for the Centennial. Not so the issue of the anthem. By 1967 Parliament agreed to adopt O Canada, but there was some question over copyright and the Weir family objections to some minor lyric changes made by the committee. In 1970 the government acquired the rights to lyrics and music.\ CBC-TV (the public broadcaster) used this video montage with O Canada as a sign-on-or sign-off to the broadcasting day (depending on region) for many years https://youtu.be/MogVdARCFgY However it wasn’t until ten years later that the bill to adopt O Canada received unanimous support and passed the House and Senate on June 27. On July 1st after a somewhat rocky 100 year history, the then Governor-General Edward Schreyer proclaimed the Act finally making O Canada the official anthem of Canada. The ceremony took place on Parliament Hill in Ottawa in front of thousands of Canadians including descendants of Weir and Routhier were on the official platform. CBC TV  also used this animated sign-on or signoff for years, showing a trip from the west coast of British Columbia to the Atlantic Island province of Newfoundland https://youtu.be/dGp1IwyhGl4 The Maple Leaf Forever still invokes strong feelings though. In 1997 the CBC held a contest to modify the lyrics to something still rousing, but that didn’t offend any particular group, especially Francophones. Even as recently as 2010, when the English lyrics were challenged yet again (the French words have remained unchanged)  by feminists for the words “in thy son’s command” and others challenged the use of “God” and stil others “native” saying many Canadians are not immigrants and not native, a journalist expressed continued dismay about “O Canada.”