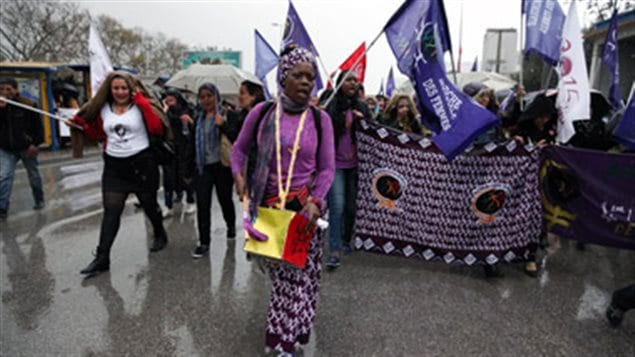 An African woman marches for food scvereignty at the World Social Forum in Tunis in March 2015
Photo Credit: WSF

It was an initiative created by the then G8 countries in 2008 called the “New Alliance for Food Security and Nutrition.” However, dozens of advocacy and civil society groups around the world including the United Church of Canada, (UCC position)    and the National Farmers Union in Canada (NFU) have come out strongly against the “New Alliance”

None of the advocacy and rights groups seem to agree with those statements.

FIAN International is a human rights organization concerned with food issues. According to their website  many of the approximately 150 private companies are huge trans-national operations or are related to them.

The NFU and others say the New Alliance in reality merely helps big business invest in African agriculture and in return requires African countries to change land policies,  and seed and trade laws in favour of big agri-business operations, saying the changes “facilitate the grabbing of land and other natural resources, further marginalize small-scale producers, and undermine the right to adequate food and nutrition.”

An NFU press release states that in the last year, controversies associated with the New Alliance have included:

In Ghana a proposed bill – dubbed the ‘Monsanto Law’ –would bolster the power of multinational seed companies whilst restricting the rights of small farmers to keep and swap seeds. This bill, which is being brought in as part of the Ghanaian government’s commitment to the New Alliance, will see the control of seeds being transferred away from small farmers and into the hands of large seed companies.

Farmers in Nigeria’s Taraba State are being forced off lands that they have farmed for generations to make way for US company Dominion Farms to establish a 30,000 ha rice plantation. The project is backed by the Nigerian government and the New Alliance.

In Tanzania about 1,300 people  are at risk of losing their land or homes to make way for a sugarcane plantation, which is a New Alliance project. An area of land the size of Washington D.C. will be used by a plantation to produce sugar for biofuels.

The New Alliance progress report in 2014  says over $1 billion in aid money has been delivered of the $8 billion committed adding that 3 million smallhold farmers have been “reached”, yet without explanation of what “reached” means.

In the UK, the Independent Commission for Aid Impact (ICAI)  in a report on “Business in Development” was critical of government involvement with the New Alliance saying

“Large, highly publicised ‘calls to action’, such as the New Alliance, which require businesses to sign up but have no means of enforcing commitments, have had little impact. Their size makes it hard to co-ordinate stakeholders and they can serve as little more than a means of promotion for the companies involved and a chance to increase their influence in policy debates”

Alex Scrivener of Global Justice now Guardian newspaper article of May 2015 writes that government involvement with big multinationals to promote investment resulting in better social conditions  is a failure and government money is better spent elsewhere instead of “instead of subsidising the activities of the likes of Coca-Cola and Monsanto.”

Jan Slomp says instead of promoting food security, this G7 public-private partnership  and with African governments appears to be more about liberalizing international trade to the benefit of giant multinationals. He says it actually impedes food sovereignty.  He notes that to improve food security, it is important to cater to bolster local economies and ensure a good price for product, something that the globalization-style models promoted by the New Alliance run counter to.

He points out that the multinationals, in cooperation with some African governments, have been buying up vast tracts of land and pushing out small hold farmers, who although they’ve been there for generations, have no real paper title to their traditional property.

The NFU and the other organizations around the world will continue to promote what they see as the negative effects on food sovereignty and nutrition by the New Alliance, and to lobby African governments to avoid signing on.