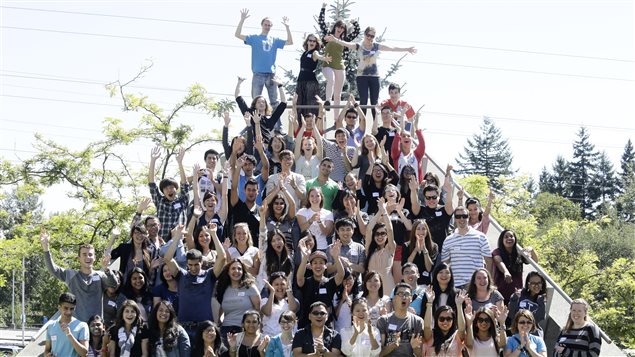 Students have been coming to Canada since just after the second world war. But now their numbers are increasing dramatically and Canadian colleges and universities are welcoming them warmly.

Jennifer Humphries, VP of Membership, Public Policy and Communications at the Canadian Bureau for International Education, says there’s been an  “explosion” of international student mobility. She says in 2001 there were 2.1 million students studying abroad, in 2014 there were 4.5 million, and in 2025 there will be 7.5 million studying outside their home-countries.  Canada hosts about 5 per cent of these students.

In 2014 the Canadian government announced plans to double the number of international students and researchers in Canada by 2022 to 450,000. The government estimated the increase would generate some 86,000 new jobs and add an additional $10 billion to the domestic economy each year. Where a Canadian student pays on average about C$6000 a year in university fees, an international student pays C$20,000; money most appreciated in increasingly cash-strapped educational institutions.

Jennifer Humphries says Canada’s number of international students has grown over 10 to 12 per cent a year over the last decade. The figures for 2014 indicate a growth of 10 per cent over 2013. They’re now tracking increases in students from countries such as Nigeria, Brazil, Russia, France, and Viet Nam. For many years China has been a steady source of nearly one third of international students in Canada.

Ms. Humphries says even more high school students are coming from abroad now to position themselves for entry into a Canadian university. And colleges and institutes of applied study are becoming more attractive to international students.

This growing academic population brings several benefits to Canada. Jennifer Humphries says many graduate students come here and play a key role in knowledge generation in research. There are tourist spin-offs when parents come to visit. The students provide social benefits when they connect with the local communities, and she says for many administrators, “the internationalization of the academy” is paramount.

Humphries says in the face of changing demographics in Canada and with skills gaps, international students are a part of the future. International graduates can work for three years in Canada. In January of this year, the federal government created a new category of immigration called ‘Express Entry’ that will help many graduates if they’d like to stay. This is in tandem with the ‘Canadian Experience’ stream of immigration, which provides the opportunity for students who have been working, and begin to feel very much at home in their academic communities.