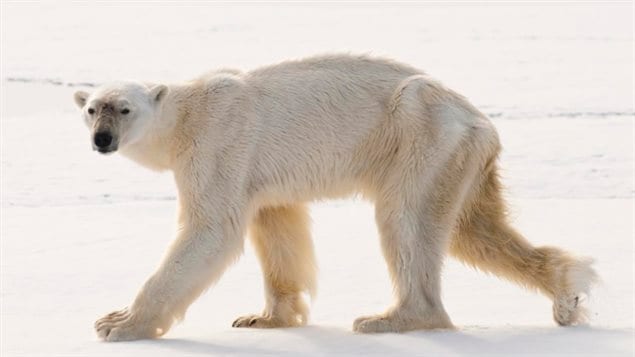 In one video, the bear is seen swimming in open water. Normally, it would sneak up behind the seal using ice for cover. But it this case it didn’t have the opportunity. Instead, the bear went underwater and swam toward the first of three bearded seals on ice some distance apart from each other.

‘Such an unusual observation’

One seal quickly dove into the water, where, being faster than the bear, it could escape. Instead of coming up to look around, the bear stayed underwater for a total of three minutes and ten seconds, then burst out of the water and tried to grab a second seal by the flipper. The seal got away.

“It is such an unusual observation,” says biologist Ian Stirling of the University of Alberta. “That said, it’s probably a relatively common sort of event that the bears dive for these long periods of time. This is very likely close to the maximum for a polar bear to be under water, although there’s no way of knowing that.”

Long dives may be linked to climate change

Van Meurs is concerned that the record-breaking dive may have to do with the melting ice in arctic regions. Polar bears need to use ice to catch their prey, either by stalking it from the ice, or by leaping onto ice where it may be resting.

In this case, Van Meurs says the bear was “very, very skinny” and may have been pushing the limits of its diving capabilities to try to survive. He thinks the long dive indicates bears are trying to adapt to the realities of climate change, and they may be losing.

‘Big changes in the Arctic’

“We’ve seen some very big changes in the Arctic,” says Stirling. “The amount of ice that remains in the polar basin in the period that it at its minimum—which  is about the end of the summer, early September or so—has declined  more than 50 per cent in the last 30 years. That’s huge.

“We know that these bears are doing much longer independent swims from place to place. The longest recorded was 11 days at sea swimming.

“So we know that these bears are going to be using these diving abilities more and more while they’re hunting…I think it will help them as long as there’s some ice. If they lose the ice completely, then there’s not very much they can do.”