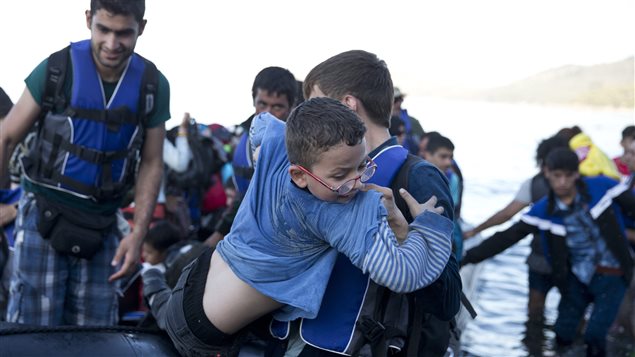 Syrian refugees arrive aboard a dinghy after crossing from Turkey today, to the island of Lesbos, Greece. More than 250,000 people have reached Greece clandestinely so far this year, the vast majority of them Syrians or Afghans fleeing conflict at home.
Photo Credit: AP / Petros Giannakouris

Multiculturalism became a core Canadian value in the 1960’s and ’70’s in the wake of the very successful 1967 centennial celebrations in Canada. Pierre Elliot Trudeau, as Prime Minister made it official policy. It was a vision that was largely embraced across the country at the time, with first and second generation Canadians eager to celebrate it.

People credit this policy with creating the reality wherein Toronto is proudly touted as one of the most “multi-cultural” cities in the world,

Now, however, with a massive migration of people arriving in Europe, Montreal lawyer, Julius H. Grey, says it is time for Canadians to do their part to help the European countries cope, welcome our share of the people so much in need, and adjust our society from a focus on multiculturalism to one of social integration.

Welcoming refugees sits well with many Canadians, but abandoning multi-culturalism might come up against some resistance. Julius Grey explains, “the problem with multi-culturalism is that if you keep separate cultures side by side, in the long-run it always fails”. He goes on to provide powerful examples from history. He concedes that multi-culturalism of origin is a good thing, and says that where it succeeded, are in those locations where intermarriage took place, eventually creating the new people.

“The marriage is where the issue is; that’s what created England and France”

When the Celts, the Anglo Saxons, the Romans and the Norman French came together they created the English nation and a new language, while in France, the Celts, the Latins and Germanic Franks created a new nation there.

This is meaty food for thought as we move toward the 150th anniversary of Canada‘s existence, in 2017, and there are so many more people to join in the celebration, including hopefully, many happily settled Syrian refugees.