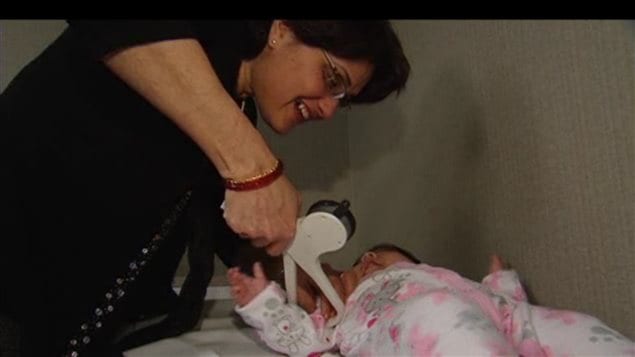 Dr. Sonia Anand took measurements from South Asian newborns and compared them to those of white Caucasian babies in a bid to understand their risk for diabetes.
Photo Credit: CBC

Although Canadian babies of South Asian origin are usually born weighing less than their Caucasian counterparts, they tend to have more body fat and a higher risk of developing diabetes later on in life, concludes a new study.

Several studies suggest that when people leave a rural life on the Indian sub-continent and migrate to urban centres in Canada and elsewhere, they have two to three times the risk of developing diabetes in their adult years. They also tend to have more fat around their middles, abnormal cholesterol and sometimes high blood pressure, increasing their risk for heart attack.

Thin/fat babies have a higher risk for diabetes

Previous studies suggest the predisposition to central obesity and excess body fat is also present in South Asians in the early years of their lives. So, researchers at McMaster University sought to test that.

They recruited nearly 800 pregnant South Asian and white Caucasian women from the cities of Toronto and Hamilton, and tested them and their babies.

“We observed that the South Asian mums have a greater burden of gestational diabetes or elevated blood sugar in pregnancy,” said Dr. Sonia Anand, professor of medicine and epidemiology at McMaster University.

And…when we measured the babies’ body weight and body fat at birth we observed that although the South Asian babies are lower birth weight, they have more adipose tissue at birth. And we call this the thin/fat phenotype.”

ListenThe predictors for excess body fat in all the babies were found to be a South Asian origin, the mother’s body fat before pregnancy, and her rate of gestational diabetes and high glucose.

“It makes us then think about ways we might be able to prevent babies from already being born with an excess amount of body fat and that may be to try and prevent gestational diabetes in the mum. And I think that’s where interventions studies should focus next in order to break this cycle of increased risk of diabetes in the South Asian population,” says Anand.

‘An exciting area of research’

Will the babies be bottle-fed or breastfed, what will be their levels of physical activity and growth trajectories be, are all questions that will be studied as the researchers follow the children until they are three years old.

“It’s an exciting area of research,” says Anand. “There are multiple groups around the world now looking at early determinants of what we call chronic diseases—those that occur later in life…The more we find, the greater chance we have of preventing some of these diseases that generally afflict older-aged populations.”