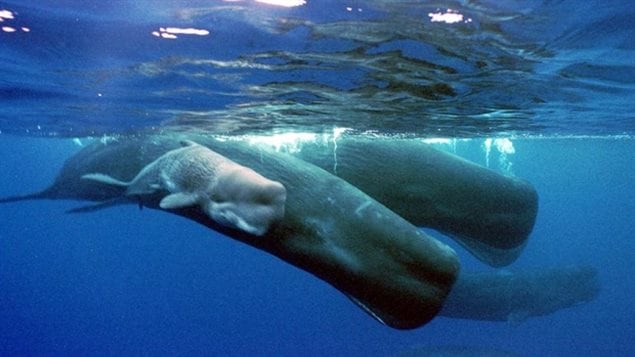 Whales too have “culture”

People tend to adopt habits from those they associate with. This could be things like clothing, or speech patterns and dialects.

A Canadian study of sperm whales has found out this “cultural” adaptation occurs with the whales as well. Also in human society those individuals that “understand” each other tend to associate together within a wider interactive society.  And so do whales.

Biologist and PhD candidate Mauricio Cantor is the lead author of a research paper studying speech and habits of two groups of whales in the Galapagos.

The research was published in the September 8 edition of  the science journal Nature Communications, under the title, ”Multilevel animal societies can emerge from cultural transmission”

Whales are known to have large brains and complex societies, and it seems they have other cultural similarities with humans.

Groups of females and calves live together for many years and communicate using pattern of clicks, called codas. These are distinct from the sounds made for echo-location. The codas are how they talk to each other on the surface between dives.

So the mothers, grandmothers, young, aunts, and some friends, are swimming around together and chit-and-chatting for their entire lives.  But while they associated with all whales, sometimes gathering in large groups, they seem to interact more with those whales who communicate using the same types of codas.   Unlike on land where there are physical barriers which have resulted in different accents, dialects and language, such barriers don’t exist for the whales, yet they have evolved into clans with unique conversational “accents” or dialects.

So there is a special structure: i.e. the vocal clan, composed of whales from different social units but with similar dialects or accents, which vary slightly from other clans.  An occasional large gathering of whales would then have several clans.

It’s all whale conversation, and the researchers can’t know what they’re communicating to each other, but they can determine there are specific differences to the language within each clan.

A social unit might consist of around 12 whales,  that live and have moved around together for years while a clan may contain several social units.

The study used  18 years of recorded conversations of clans of whales and then integrating that into computer modelling with simulated  groups of whales over 1,000 years they sought to find what factors would generate the differences in vocal patterns they had collected in their recordings.

What they found was that the evolution of different  vocal patterns were created through “learning” from those around them.  As social culture is at the foundation of culture, the clans with specific dialects represent a cultural segregation. And that a factor within the learning was that a young whale would, among other things, need a desire to learn the group codas.

Even though the young whales could hear codas from distant clans and whales, they learned their dialect from their own group.

A clan arises when whales- preferentially- learned the vocalizations of other whales they behave similarly to themselves and that they wanted to associate with.

While human cultures are diverse and unique, the finding shows that biased social learning, considered a key feature of human culture, may not be as unique in nature as previously thought and adds to the evidence that it may be at play in other animal populations in nature.

Cantor points out the finding  “is not to suggest that whale culture equals the diverse, symbolic and cumulative cultures of humans. But it is still fascinating that a society of completely different animals, living in a completely different environment, can have striking similarities with our own”.