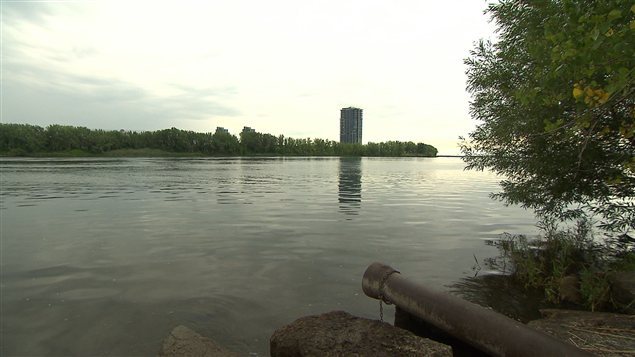 The equivalent of thousands of olympic size swimming pools of raw sewage and untreated chemicals will be dumped into the St Lawrence later this month. The city of Montreal says it has no alternative during a construction project that will require digging up and moving a major sewage collection pipe.
Photo Credit: Radio-Canada

Montreal to stink up the St Lawrence

The City of Montreal says a construction project will require it to dump a massive amount of raw sewage into the St Lawrence river.

A major highway rebuilding project in the middle of the city requires the digging up of a huge sewage collector pipe under the project. The collector is a major intersection where several other major sewage pipes from several sources around the city are joined before the effluent is directed on to a treatment plant.

The interruption and moving of the collector is scheduled to last 7 days starting October 18.

During that time, an estimated 8 billion litres of raw sewage from homes, industry and hospitals will be flushed directly into the St Lawrence.

The city says it has no choice and has received approval from it will go ahead with a project to dump raw sewage into the river.

A spokesman for the City of Montreal, Philippe Sabourin said, “The river has a huge dilution capacity. It isn’t a major environmental concern”.

He does admit it poses a problem for fishermen, kayakers and surfers who ride the waves in a rapids area as the river flows past the city

Others dare shocked that in 2015, the city would so readily dump untreated human waste and chemicals into the environment

Sylvain Ouellet is a spokesman on environmental matters for Projet Montreal a municipal environmental political party.  “It’s hard to believe there is no other mitigation measure that could be put in place to avoid untreated wastewater from being dumped directly into the river for a week”, he said.

Wouldn’t it be possible to pump the wastewater into another sewer line temporarily, to avoid polluting the river?” Ouellet asked.  “Isn’t it possible to come up with a portable water treatment method, some way of screening?” he asked. “Is it not possible to ask industries in the area to temporarily stop putting noxious materials into the sewer system?”

Others also question the decision to proceed. Civil engineer Isabelle Jallifier-Verne said any human waste carried by the current could have negative consequences for communities downstream from Montreal.

She said the effluent could also pollute the river banks, potentially posing a threat to the plant and animal life that live along the water’s edge.

Montreal professor Dr. Grant Brown agrees. The Concordia University biologist specializing in aquatic behavioural and chemical ecology, said the untreated effluent could cause harm to a number of aquatic species.

Water-treatment specialist Abdelaziz Gherrou said there’s no telling how extensive the environmental toll of untreated wastewater would be.

“Why have we put in place water-filtration plants if the water can dilute everything?” Gherrou asked, referring to Philippe Sabourin’s comment that the massive flow of the St Lawrence would adequately dilute the effluent.

The plan was briefly stalled when it became public earlier this week and there was a substantial outcry, but will now proceed.

But ! Primary treatment only

The water treatment plant that deals with the majority of the city’s water is the Jean-R. Marcotte plant in Pointe aux Trembles, at the eastern tip of the island. It is the largest in North America, the third largest in the world, and it deals with 50% of all water treated in the province of Quebec.

In spite of its size however, the water coming out of the plant is only marginally “cleaner”. The sewage comes from homes, business and industry and hospitals and clinics.  The huge treatment plant only carries out primary treatment of sewage, which removes solids and some nutrients but leaves behind bacteria, viruses, pharmaceuticals, heavy metals, and other contaminants.