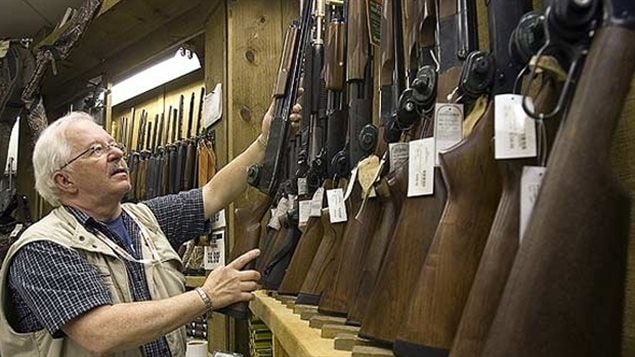 Concern about the impact on domestic gun owners was the reason the Canadian government gave for not signing an international arms trade treaty. The agreement deals only with cross-border transactions.
Photo Credit: CBC

Allies sent envoys to directly appeal to the Canadian government to sign a UN arms trade treaty to no avail, reports the Ottawa Citizen newspaper. The treaty seeks to regulate the export of arms and ammunition and to try to keep them away from criminals, human rights abusers or terrorists.

Canada initially voted in favour of the landmark treaty when it was introduced in April 2013. However it failed to sign the treaty saying it might negatively affect domestic gun owners, even though the treaty only covers the sale and transfer of arms across country borders. Canada is one of the few countries and the only NATO country to have not signed.

Several peace groups and other civil organizations initially urged Canada to sign the arms treaty, but now the Ottawa Citizen reveals that a group of top level European diplomats visited Canada’s Department of Foreign Affairs in Ottawa with the same goal. They included representatives of the European Union, Germany, the United Kingdom, France and the Dutch ambassador. The Canadian government of the day did not bow to the pressure.

Most of the countries that have not signed the arms treaty are in Africa and Asia. All of Europe have signed or ratified the deal except for Kosovo and Belarus. The U.S. signed last year.