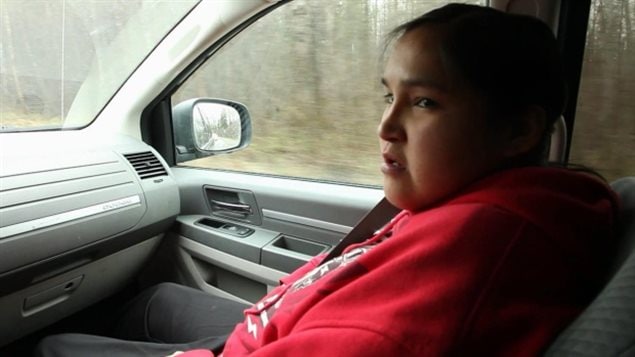 Bianca Moushoun says she was lured by beer, and paid sometimes in coke, sometimes in cash to keep quiet about sexual acts demanded by provincial police officers.
Photo Credit: Radio-Canada

Native women in northern Quebec are sharing stories of sexual assault and abuse of power at the hands of provincial police. Radio- Canada’s investigative program, Enquete revealed the allegations from the women living in Algonquin communities near Val D’Or, Quebec.

Some officers allegedly picked up women who appeared to be drunk, drove them out of town, and left them to walk home in the cold. Other women allege they were physically assaulted and forced into sex acts.

The women “show up with bumps, bruises, punches and burns.”

Bianca Moushoun told the journalists that two years ago male officers would routinely give her beer from the trunk of their cars, then drive to a remote area.

“Starlight tours is what they call them in northern Ontario”

Another woman, who spoke only on the condition of her anonymity, told of being assaulted by an officer in the police vehicle on the highway between Val D’Or and Waswanipi, the Cree community 275 kilometres northeast of the town.

“He wanted a blow job. I said no,” she wrote. “He threw me out and grabbed my hair. He left me alone on the highway.”

Photos of a cut above her right eye and a wound on the top of her head she says were taken after the altercation.

A bartender at a local hotel in Val D’Or, Carol Marcil, says she has heard similar stories from native women many times. She says as many as 30 women in the region have suffered through these experiences.

Marcil stressed “not all” provincial police officers in Val-d’Or act that way. She said, “There are two or three or four bad apples [among them],”

“We have been hearing these kinds of stories for quite some time now and up until this point they have not been taken seriously.”

Dawn Lavell-Harvard, president of the Native Women’s Association of Canada, says she’s horrified, but not surprised. “We have been hearing these kinds of stories for quite some time now and up until this point they have not been taken seriously.”

She says there are similar stories, from other regions in Canada. ‘Starlight tours’ is what they call them In northern Ontario, and young indigenous men are targeted as well as the women.

She says she has heard the stories of young women and men, whose jackets and shoes were taken and they were left in the middle of nowhere to make their way back to town in the frigid winter temperatures.

“That’s actually putting somebody’s life in jeopardy in large portions of Canada during the winter months, that could potentially be a death sentence.”  Dawn Lavell-Harvard says.

When asked about the ongoing demand for an inquiry into Canada’s at least 1200 missing and murdered native women, Laval-Harvard says, “I think these allegations prove the validity of our claim so far, they prove the validity of our argument that we need an inquiry, that these kinds of stories, the treatment of indigenous people in general but indigenous women and girls specifically; the tales that we’ve heard, the stories that women have come forward and described their treatment would not be believed.”

She says, in the event of an inquiry, “the light is going to be shone on a lot of cruelty”.

Meanwhile, In Quebec, an internal police investigation is under way. According to police spokeswoman Martine Asselin, “fourteen files have been opened for allegations related to the behaviour of our officers,” and she clarifies, “These are allegations, not charges for now,”

“All the files will be transferred to [the Crown prosecutor’s office], and we’ll see what happens after that,” Asselin said.

The Val-d’Or Sûreté du Québec (provincial police) detachment has about 50 officers. Eight among them have been questioned by investigators, and for now, they remain on the job.