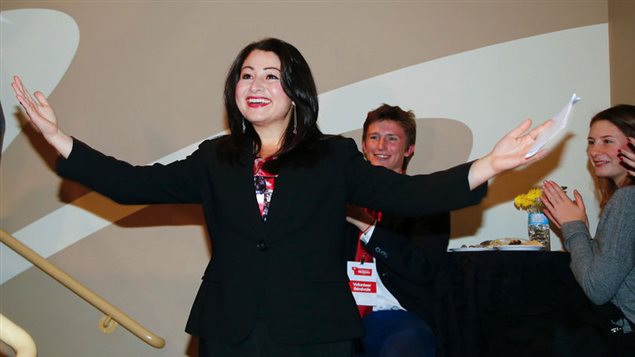 Maryam Monsef was elected Monday as the new Liberal MP for Peterborough-Kawartha, a lake-region in Ontario.

The first woman Member of Parliament from the riding, and at age 30, the youngest-ever, Monsef’s is also an amazing story, as a refugee from Afghanistan.

“This is a night to be happy – we worked really hard for this,” she said, during her victory celebration at Showplace Peterborough late Monday night.

She thanked her mother, first and foremost, Suri Basir-Monsef, who’s been by her side at every campaign debate and event.

Monsef fled her native Afghanistan in 1996, when she was 11, with her mother and sisters Mina and Mehrangiz (both of whom were at the victory party). The family first went to Iran where they were not welcome.

Then Suri Basir-Monsef, a widow, brought her three daughters to Canada settling in Peterborough where her brother was living.

“It is not easy raising three girls – three very strong-minded girls as a single mother,” Monsef said. “But she did it. And she did it in a country like Canada, where someone like me – 20 years later – can step up here.”

“You showed me what courage is about,” Monsef said to her mother. “I thank you.”

Maryam Monsef, in an interview on CBC Radio today, shared her memories of the challenges of that first year. She said she wanted to go home everynight, but eventually, due to the kindness and warm welcome from neighbours, the family settled happily in the small city 140 kilometres from Toronto.