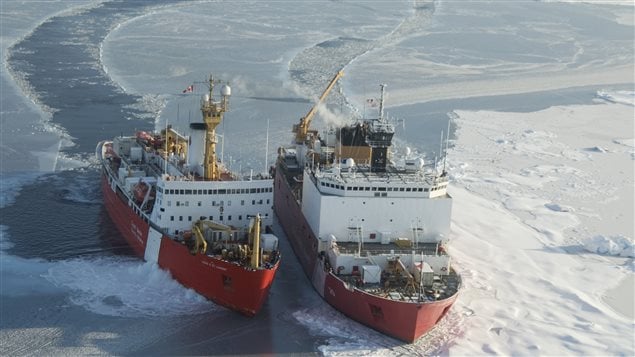 Experts from all eight Arctic nations are gathering in the United States on Wednesday to sign a historic deal for their coast guards to work together in the treacherous but increasingly accessible waters of the North.

“The ACGF will be an operationally-focused organization that strengthens maritime cooperation and coordination in the Arctic,” said Lisa Novak, a spokesperson for the U.S. Coast Guard. “The Forum will help to implement Arctic Council agreements, but also acts as an independent body making its own decisions and work plans that focus on Arctic operations.”

Novak said the impetus for creating the ACGF grew out of the concerns of Arctic Council member countries over the increasing need to ensure safety, security, and stewardship of Arctic waters.

The forum will also discuss emergency response, icebreaking and collaboration, said a statement from the Canadian government.

“The heads of the eight coast guard agencies, including Canada, have agreed that collaboration on such operational matters is to everyone’s benefit,” said Carole Saindon of the Department of Fisheries and Oceans, which runs the Canadian Coast Guard.

The forum was to have been created in Canada in March 2014.

An agreement in principle had been reached and the final deal was supposed to have been signed. But negotiations were delayed when the Harper government refused to allow Russian officials to take part.

“The (Prime Minister’s Office) insisted the Russians not be invited because of the Ukraine,” said John Higginbotham, who attended that meeting as a fellow of Carleton University’s Centre for International Governance Innovation.

Canada’s allies were not pleased at the refusal, Higginbotham said.

“That really put the cat among the pigeons.”

Russians were allowed into the U.S. to complete the talks after the Americans assumed the lead.

In most countries, coast guards are a branch of the military. That means the new forum will also provide a meeting place for high-ranking military officials from member countries, say experts.

“The most important consequence of the meeting will be that from now on there will be regular contact, regular meetings and exercises between the coast guards of all eight Arctic countries, and most importantly between Russia and Arctic NATO countries,” said Michael Byers, a professor of political science at the University of British Columbia. “It’s very important that they’d be able to speak with each other to build confidence, to cooperate, especially given the tensions between Russia and NATO elsewhere in the world.”

Byers said there is a strong understanding in Washington and Moscow that the two countries need venues for diplomatic and security cooperation, and the Arctic where the two superpowers already cooperate is an ideal place to build this cooperative relationship.

“In December 2014, a South Korean trawler sank on the Russian side of the Bering Sea and the first thing the Russians did was to call the U.S. Coast Guard,” Byers said.

The Coast Guard Forum will exist in parallel with the 2011 treaty on Arctic search and rescue, negotiated through the Arctic Council. That treaty committed signatories to providing search and rescue in their sector of the North.

“This new forum will supplement existing cooperation, provide more regular contact between the leaderships of the different Arctic coast guards but it’s being built on top of already strong foundation,” Byers said.

One of the forum’s first actions will be to run a tabletop search and rescue simulation. That will establish communications protocols and determine who responds to what.

The head of the U.S. Coast Guard, Admiral Paul Zukunft, has said an actual exercise could be mounted as early as next year.

The forum, although it will involve military personnel, will steer clear of security issues. That will follow the lead of other coast guard forums that already exist, such as those for the North Atlantic and North Pacific.

The forum is separate from the Arctic Council, the chief international diplomatic body on northern issues. However, its leadership will rotate in concert with the council, which is now led by the U.S.