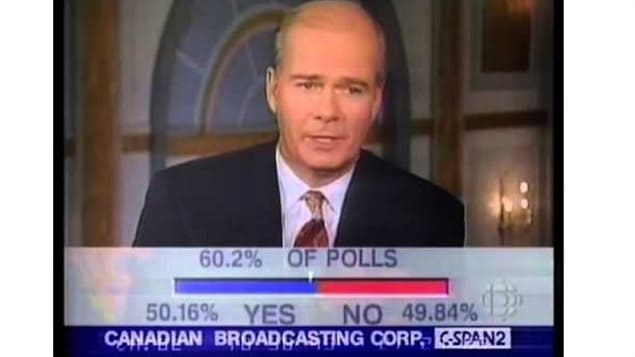 A rather worried looking CBC national news anchor Peter Mansbridge during coverage of the referendum vote showing the extremely narrow margin for and against separations which went back and forth during counting.
Photo Credit: CBC- C-span

Just before the frightening night of Hallowe’en on October 31, when little children dressed as goblins and ghosts and witches go door to door in Canada seeking candy, a much, much more fearful prospect had cast its shadow over Canada.

In the mostly French-speaking province of Quebec, the provincial separatist party in power has organized the second referendum on Quebec separating from Canada to form an independent country. The voting took place on October 30 1995.

The first referendum in 1980 had been rejected by Quebec voters, but the provincial separatist political party, Parti Quebecois, had maintained ever since that if it came to power again, it would hold another referendum. So it was that when the PQ was elected to power again in 1994, then leader Jacques Parizeau, began his campaign for another referendum to take place the following year.

During the campaign polls had shown at various times the “yes” side (for separation) leading, and then the “no” side in front (remaining with Canada).

In the days leading up to the referendum vote, the uncertainty of Canada’s future as a country had serious implications, Canadian banks all but shut down Canada’s $30-billion-a-day foreign exchange market as business dried up ahead of the Referendum.  This was cited as an indication of one the severe financial consequences facing both Quebec and the “rest of Canada” in the event of a separatist “oui” win.

On October 27th, then Prime Minister Jean Chrétien came to Montreal to speak to over 40,000 people at Place du Canada in the biggest political rally in Canadian history 3 days before the  Québec Referendum . With the fate of the country in the balance, thousands of people from across Canada had arrived by bus, train, plane and car for the “Unity Rally” an ad hoc event, to urge Québec to stay in Canada.

The Prime Minister had been criticized for doing nothing to stem the “Oui” (yes) tide after the entry of popular Quebec politician Lucien Bouchard entered the fray, taking centre stage from the less charismatic Parti Quebecois leader and then Premier of Quebec, Jacques Parizeau.

So it was after an often bitter campaign that the votes were cast and the nation, waited with bated breath for the results.

As the votes came in during the evening, it was a real nail-biter as the yes and no sides (oui –non) were neck and neck, and then the numbers of the oui pulled out in front.

At the last minute the no side squeaked by to defeat the separation by a final tally of 50.6 percent to 49.4 percent.

One of the comments which has haunted the separatist movement ever since, was by the embittered Premier Parizeau who in his speech after the votes were counted blamed the loss on “money and the ethnic vote”.

The separatist movement ever since has blamed their loss on cheating by the “non” side and unfair financial interference for example in terms of the unity rally Federalists of the “non” side point to the rejection by PQ scrutineers of over 86,000 ballots cast in mainly Anglophone ridings.

A multi-year campaign by English rights groups to have those ballots re-examined was fought against by “oui” forces, and eventually the ballots were destroyed, taking whatever secrets they may have held.

Current leader of the federal New Democratic Party, Thomas Mulcair who was previously as member of the provincial Quebec Liberal party Liberal had called for an inquiry into the organized rejection of No votes in his riding and others during the 1995 referendum. “This was an orchestrated, manipulated electoral fraud,” he said at the time.

And so it was by the slimmes of margins that Canada as a nation survived intact.

In the book “The Morning After” journalist and political commentator Chantal Hebert, and former politician and commentator Jean Lapierre interviewed the major players on both sides of the campaign.

It showed confusion and a lack of planning on both sides, and an undue confidence by both that they would win. Federal politicians had mostly run a dangerous “hands off” strategy, while Jacques Parizeau had plans to proceed with a universal declaration of independence and to completely sideline the other players in his campaign, Lucien Bouchard and Mario Dumont who had been kept out of the loop on Parizeau’s plans.

For his part, Parizeau was so assured of victory, that he had not prepared two speeches as politicians almost always do to cover a win, or a loss. The result was his infamous off-the-cuff tirade.

Since then the separatist movement has faded, even though current PQ leader, Pierre-Karl Peladeau has insisted if the Parti Quebecois is returned to power, he will hold another referendum

In the most recent federal election, the Quebec-based federal separatist party, Bloc Quebecois fared poorly with 11 seats and a low share of the popular vote of only 19 percent. The charismatic Bloc leader, Gilles Duceppe, who came out of retirement to lead the party once again, did not even win his own riding.

A survey this week by the CROP polling firm asking residents whether they wanted Quebec to become an independent country showed 64 percent answering no, and 34 percent yes.