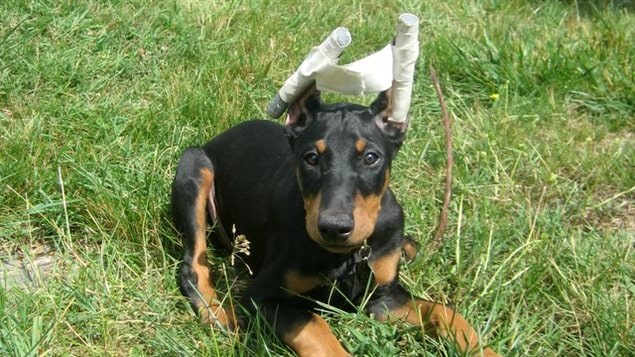 A Doberman pinscher puppy with its ears taped after cropping to train them to remain upright in the desired shape and carriage.
Photo Credit: jsmjr- wiki commons

In the west coast province of British Columbia, dog owners and breeders will noew have to look elsewhere for cosmetic surgery for their dogs.

This refers to the practice of ear cropping, and tail docking.

The College of Veterinarians of B.C. (CVBC) has voted to ban the cosmetic procedure of ear cropping this week and thus join several other provinces in trying to end the practice they say causes pain and can alter canine behaviour. “Ear cropping is an unnecessary procedure unless carried out in cases of injury or for reasons of health concerns,” college registrar Larry Odegard said in a statement issued after the vote.

The veterinary oath states in part, “I will strive to promote animal health and welfare, relieve animal suffering,…”

Emphasizing that point, CVBC president Nick Shaw said, “(Ear cropping) has absolutely no arguable benefits to the animal under any circumstances.”

The procedure is generally performed on show dogs such as schnauzers, pit bulls, boxers, and pinschers — which sees up to three-quarters of the animal’s ear flap chopped off so that normally floppy ears instead stand up straight.

In a media release the CVBC says that while breed associations continue to resist ear cropping bans because of historical practices, “veterinarians have an ethical responsibility to the animals they treat,” and that  “Ear cropping goes against that responsibility.”

In the CVBC position statement  the college asks that breed associations in Canada change their standards to allow for natural state and points out that several other countries do not permit cosmetic surgery and that the breed associations there allow dogs to compete in their natural state. These include most of Europe, Enlgand, Australia, and New Zealand.

The BC Society for the Prevention of Cruelty to Animals applauds the move, and says it will help with enforcement by conducting investigations and recommending charges against individuals or veterinarians believed to be performing the procedure.

The Canadian Kennel Club BC Southwest Director Joan Bennett, is quoted in the Vancouver Province newspaper saying it’s unlikely they would join in the ban, adding, they have always supported the breeds with the cropping and “We’re very saddened by (the ban) because we believe in freedom of choice.”

She thinks owners may simply go to the US or the neighbouring province of Alberta to get the procedure done on their dogs.

Others have suggested the practice may go underground to be performed by owners or other unqualified people in even more painful and dangerous situations.