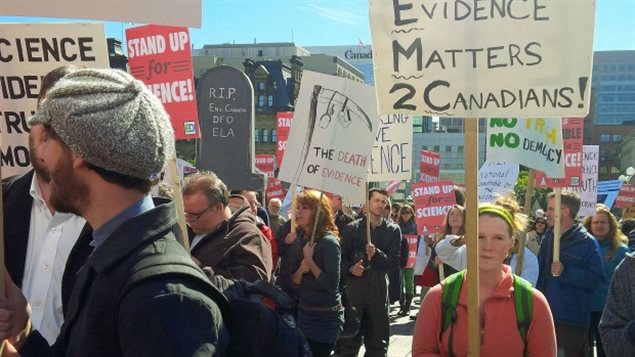 Scientists gathered in front of Parliament in September 2013 to protest cuts to research and what they said were the government’s attempts to ‘muzzle’ scientists.
Photo Credit: Margo McDiarmid/CBC News

Canada’s global brand has been damaged by the former Canadian government’s “ill-conceived ‘war on science’ and rejection of evidence-based policy and decision-making,” writes former diplomat Daryl Copeland, now a fellow at the Canadian Global Affairs Institute.

Copeland has written a report which criticizes the conservative administration’s funding cuts for science particularly for basic research as opposed to research for commercial application.  He notes that science-based departments and agencies have been seriously depleted. And he decries the erosion of the role of scientific evidence as a guiding principle for legislators who he says, preferred to put political, ideological and electoral principles first.

‘An erosion of science’

Copeland says science is a critical tool for addressing many challenges facing the world including climate change, disease, the collapse of biodiversity, and nuclear proliferation. He says there has been such an erosion of science, that the newly-elected Canadian government will have a difficult time rebuilding it. He has several suggestions:

-The position of Chief Scientist should be restored to deliver advice to the highest level of policy and decision-making in government. The position was cut in 2008.

-A Parliamentary Science Officer should be appointed to scrutinize the quality of evidence and provide advice to legislators.

-Budget cuts made to science-based departments and agencies should be reversed, especially those to the government’s health and environment departments, those responsible for national parks, fisheries and oceans, as well as the National Research Council and the natural Science and Engineering Research Council.

-Funding that was shifted from basic science to commercially-focused research should be restored.

– More Science Councillor and Attaches should be deployed in diplomatic missions abroad and science courses could be offered to those studying to get in to the foreign service.

An opportunity ‘to restore Canada’s place in the world’

Canada’s new government has pledged to be more involved on the international scene than was the last government. It wants to re-engage with various United Nations bodies and Copeland says science can help Canada recapture its role as an honest broker and non-threatening middle power.

“I think there’s a real opportunity here by rebuilding science and our capability to practice science diplomacy to help restore Canada’s place in the world.”