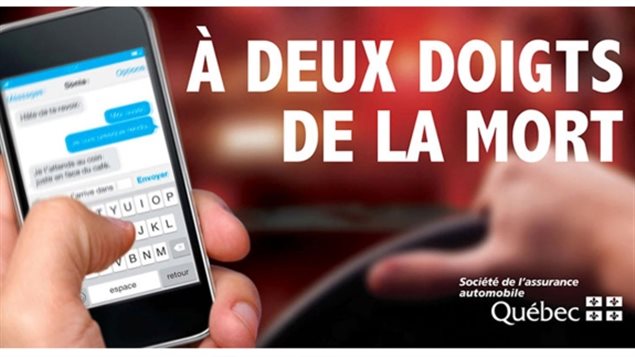 Last month the Quebec government auto agency launched another public safety campain on French media to warn of the dangers of texting and driving.. "Two fingers away from death"
Photo Credit: SAAQ

It started with a public safety awareness campaign, and ended with a bang…..and with a tweet from the Quebec provincially-run auto licensing and insuring agency, the Societe d”Assurance Automobile Quebec. (SAAQ)

The media campaign ended on French radio and TV in October but has continued as signs on busses.

Yesterday, a woman  in Quebec City who was texting while driving had the ironic misfortune af ramming the back of a bus which carried one of the posters advising of the dangers of doing just that.

Luckily the driver was not hurt, although the car is badly damaged, and there will in all probability be an additional fine for texting and driving of about $100 and four demerit points.