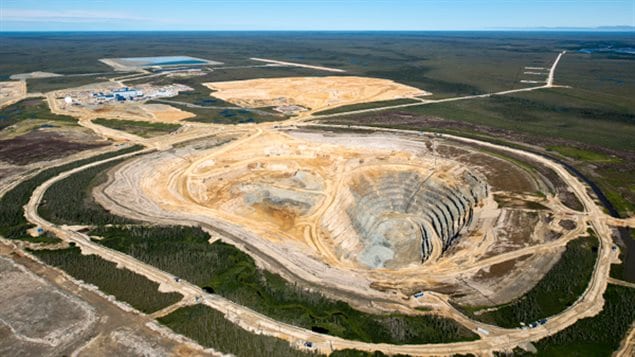 An environmental group says there may be serious gaps in pollution monitoring by mining companies.

The group, Canadian Parks and Wilderness Society-Wildlands League (CPAWS /Wildands) suggests the policy of “self-reporting”  by a diamond mine in Ontario may be open to abuse.

CPAWS  Wildlands League conducted an 18 month investigation of one of the world’s most productive diamond mines, the De Beers Victor Diamond Mine in northern Ontario and says mercury contamination may be much worse than the mine or the Ontario government are reporting.

The mine operates in the James Bay lowlands, one of the world’s largest wetlands which supports vast numbers of wildlife, aquatic life, and plants. The Victor permit covers 36 hectares and the open pit mine cuts 200 metres deep.

CPAWS says De Beers has failed to report on 5 of 9 surface water monitoring stations for seven years, in contravention of its mandatory mining permit.

Trevor Hesselink, Director of Policy and Research for CPAWS Wildlands League and lead author of the special report says in a press release, “To compound matters, it is the downstream mercury samples that are not being reported”.

Titled Nothing to see here: failures of self-monitoring and reporting at the De Beers Victor Diamond Mine in Canada,  it is the first report of its kind by an environmental not-for-profit in Canada that provides a detailed analysis of persistent reporting failures associated with a mine.

The CPAWS document begins with the statement

Back in 2007, mining giant De Beers itself predicted that operations at its Victor Mine in Ontario’s Far North, to open the following year, might increase levels of toxic methylmercury in the downstream river by up to 1100 per cent.

We obtained that disturbing information only through a Freedom of Information request, submitted by our colleagues at Ecojustice. It wasn’t discussed in the federal environmental assessment, during public consultation for the mine’s environmental permits, nor anywhere else on the public record. Yet it appears to have been accepted by Ontario’s Environment Ministry (the Ministry) at the time of the permitting.

In a CBC story by Jody Porter this week, DeBeers spokesman Tom Ormsby said the company collects data from 200 ground wells and 15 surface wells and submits relevant data to the government. He also said some sample sites may no longer be relevant given differences during the contstruction phase of the mine, and the current operational phase.

The mine’s activities trigger adverse impacts on the environment by stimulating mercury conversion to methylmercury. Methylmercury, a neurotoxin, is a dangerous threat to aquatic life as it biomagnifies up the food chain into top predator fish. “Unreported data from one of the downstream stations shared with us by a concerned party, shows a tripling of methylmercury,” Hesselink said. “These increases are particularly alarming in the context of a river system in which the fish already exceed safe guidelines for eating and Indigenous people rely on fish as a country food.”

De Beers says it will improve

In the CBC story a Ministry of Environment and Climate Change spokesperson said it had raised the Wildlands League’s concerns with De Beers Canada and that the company has agreed and committed to making improvements.

A related story and investigation by the CBC’s Rita Celli revealed that the mine’s royalties fees are surprisingly secret, but that in the fiscal year 2013-14 the mine paid a mere $226 in royalties to the province.