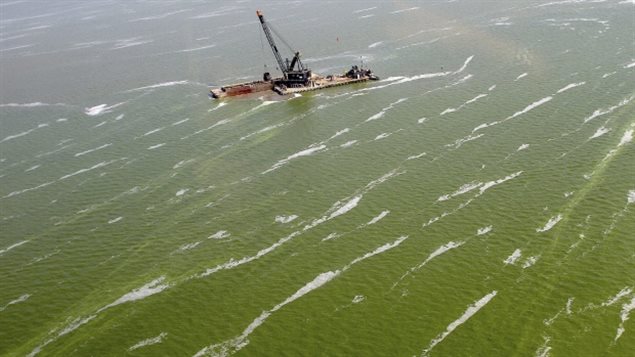 Massive algae blooms turning what should be dark blue water to a thick green in the North American Great Lakes. The blooms are caused by a number of factors, but made worse by warmer water temperatures. In this Aug. 21, 2013 photo, a dredge barge works along the edge of a large algae bloom in the Toledo shipping channel in Toledo, Ohio. Toxins from the algae blooms on western Lake Erie are infiltrating water treatment plants along the shoreline, forcing cities to spend a lot more money to make sure their drinking water is safe.
Photo Credit: D’Arcy Egan/Plain Dealer/Associated Press-via CBC

A new global study shows the world’s fresh water lakes are heating up, and that lakes located further away from the equator are warming faster than others.

Sapna Sharma (PhD) is the lead author of the research. She is an assistant professor in the Department of Biology at York University in Toronto.

The study looked at manual measurements of particular lakes over the course of a century and especially at 25 years of satellite measurement of over 200 lakes around the world.

It is also the first global study of it’s size and scope to examine the issue of warming of freshwater lakes.  Some 64 researchers were involved in the study in 20 countries around the world.

The research was published in Geophysical Research Letters as open access under the title, Rapid and highly variable warming of lake surface waters around the globe

What the researchers found was that lake temperatures show an average increase of  of 0.34 degrees Celsius per decade.

Professor Sharma points out however that lakes which are ice-covered for part of the year are actually warming twice as fast as air temperatures, and North America’s Great Leaks are among the fastest warming in the world. She says Lake Superior for example has warmed some 3 degrees Celsius over the study period.

She points out that warming temperatures are detrimental to fish production and that in turn will have a detrimental effect on food supplies in many countries. Warming also aids algal blooms which rob the water of oxygen and further harm fish and aquatic life.

In addition, the toxic qualities of the blooms affect the potable water quality. This has negative implications for animal life around lakes and implies added costs for water purification for cities which provide water for the hundreds of millions of people who depend on freshwater lakes for their water supply.

The warming lakes also result in release of more methane gas which contributes to the “greenhouse” effect and global warming. A cubic metre of methane is the equivalent of 20 cubic metres of CO2.

Professor Sharma says this is yet another indication of the seriousness and rapidity of global warming and how it may affect things like food supply.

She says many scientists in other disciplines are already incorporating the research to aid in their own varied studies.

The research was funded by York University, NSERC, NASA, and the National Science Foundation.