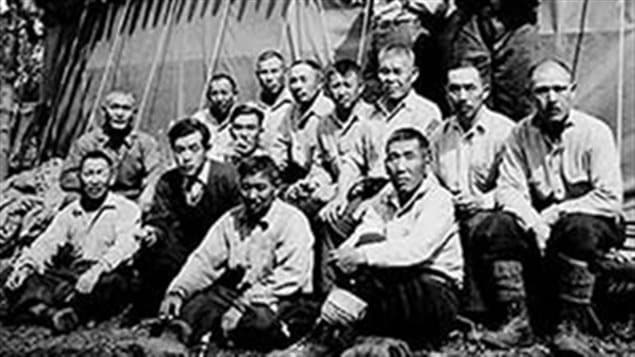 A group of interned Japanese Canadian men pose at a road camp in western Canada in March of 1942.
Photo Credit: Library and Archives Canada

When Canada declared war on Japan in World War II, the Canadian government not only took Canadians of Japanese origin away from the homes, it also sold their houses and other property without their permission. New research suggests the western city of Vancouver had a long-term plan to redevelop the area when many Japanese Canadians lived. It took advantage of their evacuation to internment camps to condemn their homes and to urge the federal government to sell them.

‘Racism and antipathy towards Japanese Canadians’

There was also a desire on the part of some members of Parliament to give their houses to soldiers returning from the war. “Running through both of those arguments…were very strong expressions of racism and antipathy towards Japanese Canadians who had been part of British Columbia life for almost a century,” says Jordan Stanger-Ross, project director of Landscapes of Injustice, a project dedicated to the issue of this forced sale.

Many ethnic Japanese were living near the Pacific Coast in the province of British Columbia. About 75 per cent were Canadian citizens by birth or through naturalization. In February and March of 1942, they were rounded up and taken from their homes. In most cases, their homes were rented out, but the owners were assured their property would be returned to them after the war. Many hid valuables and treasured items in walls and other parts of their properties.

Not even one year later, on January 19, 1943, the federal government reversed itself and sold homes, fishing boats, businesses, farms, vehicles, clothing—everything the internees had not carried away with them. Hundreds wrote letters of complaint.

There was eventually a public inquiry into the matter which Stanger-Ross said was limited and inadequate to compensate owners for their losses. “That was a deliberate position of the federal government—that they wanted to limit through this inquiry the extent of payments that would need to be made.”

There have been apologies from governments, and in the 1970s and 1980s, some internees were compensated a sum of $20,000 each for general grievances, but not specifically for lost property. “In the lower mainland of British Columbia, where many Japanese Canadians were living, the rise in property values in the post-war period has been staggering,” says Stanger-Ross. “So to calculate the values of the properties that were lost, farms that were subdivided into dozens of lots…would be a staggering amount that Japanese Canadians have lost.”

A lesson for Canadians, says advocate

The treatment of Japanese Canadians during the war was said to be necessary to protect national security. But Sanger-Ross says the threat was over when their property was sold. People were in internment camps and their homes, warehouses and other property posed no threat.

This provides a valuable lesson for Canadians in the current context, he says. “I think that upholding civil and human rights in the context of perceived national insecurity may be one of the challenges our country faces–one of the big challenges for multiculturalism in our society for the next century.”

Last year, Canada passed controversial, new security legislation to deal with the threat of radical Muslim terrorism. When Bill C-51was being debated, Opposition Leader Tom Mulcair compared some of its provisions to those which stripped the rights of Japanese Canadians during World War II.