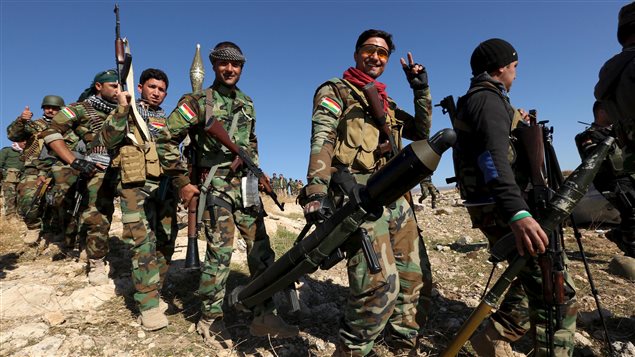 Is Canada training a separatist army in Iraq?

In the millennia-old history of Kurds, there has never been a time when this ancient people of the Middle East were so tantalisingly close to statehood.

And if in the next few years, the Kurds do manage to bridge their political, tribal, religious and cultural differences, and declare statehood in their ancient homeland in northern Iraq, they’ll owe a small debt of gratitude to Canada.

That’s because whether Ottawa likes it or not, Canada’s elite special forces have been training the nucleus of what is likely to become the army of independent Kurdistan.

And with Prime Minister Justin Trudeau’s newly announced plan to triple the number of Canadian special forces advisers and to equip the Kurdish peshmerga fighters with light arms, the future Kurdish army will not only be one of the best fighting forces in the region but will also likely sport Canadian-made assault rifles, machine guns and light mortars.

The irony, of course, is that neither Canada nor its Western allies want the Kurds to secede from Iraq, says Michael Bell, a four-time Canadian ambassador in the Middle East and Paul Martin (Sr.) Senior Scholar in International Diplomacy at University of Windsor.

But the resolution of the broader problem of Iraqi unity has taken second place to the urgent need to confront the so-called Islamic State in Iraq and Syria (ISIS), says Bell.

The Kurds have proven to be the most effective ground force confronting ISIS in Iraq and in Syria, and it makes sense to support them in the campaign against ISIS, says Bell.

The Western strategy of dealing with ISIS is to use the Kurds as a ground fighting force while the U.S.-led alliance uses its overwhelming air power to debilitate ISIS to a point when it will be difficult for its supporters to equate it with the Islamic caliphate in the heart of the Middle East that ISIS leadership has been pushing for.

In Western calculations, ISIS with its drive to carve out a Sunni Islamist proto-state from Iraq and Syria poses a much greater threat than any eventual Kurdish independent state in northern Iraq.

The allies would prefer a united Iraq with a confederated system that allows the Kurds to exist in a quasi-independent state without actually declaring de jure independence. The problem is the Sunni population of Iraq is alienated from the Shia-dominated government in Baghdad, says Bell.

The government in Baghdad represents the interests of the Shia majority and Prime Minister Haider Al-Abadi is in a very weak position, says Bell. Al-Abadi is under tremendous pressure from Iranians who control what the government does, he says.

With the ongoing sectarian tensions between Sunnis and Shias throughout the Middle East their peaceful coexistence in unified Iraq will be very difficult if not impossible.

Even with ISIS severely degraded, Iraq faces the possibility of breaking up into three entities: a Sunni part, a Shia part and a Kurdish state.

Moreover, even the operation to retake Mosul from ISIS could accelerate a Kurdish drive for independence.

The Kurds have for years yearned for control of Iraq’s second-largest city, which they claim is part of the Kurdish homeland along with the oil-rich city of Kirkuk.

They managed to get a foothold in Kirkuk and its vast oil fields following the spectacular collapse of Iraqi forces in the face of a rapid advance by ISIS militants in June of 2014. Now, they share an uneasy cohabitation with Shia militias sent to the city by the government in Baghdad to prevent it from falling under full Kurdish control.

Despite their successful operation to recapture Ramadi, Iraqi security forces will need the help of Kurdish peshmerga fighters if they ever hope to recapture Mosul, a city ten times larger than Ramadi.

Leaked U.S. plans to recapture Mosul last year suggested that a force of at least 25,000 fighters strong was needed to take the city of 1.5 million inhabitants. The plans called for five Iraqi army brigades and three Kurdish brigades to work together to liberate the city.

About 65 per cent of Mosul’s population are Sunni Arabs, and the city has significant Turkoman and Kurdish minorities, especially in its eastern quarters.

Mosul’s multicultural mosaic, just like that of Kirkuk, is rife for interethnic conflict. Neither Mosul’s Arabs nor Turkomans are likely to be very welcoming of Kurdish forces. Even if the attacking forces manage to capture Mosul in one swift blow, the city runs the risk of being turned into Beirut or Tripoli-like fiefdoms controlled by various factions, with simmering tensions rippling through the rest of the fragile relationship between Baghdad and Kurdish leadership in Irbil.

Heavy losses and an inconclusive operation to recapture Mosul from ISIS could also spur Kurdish President Masoud Barzani to seek formal independence to deflect public attention from the growing economic crisis to due to falling oil prices and internal political challenges.

In any case, it seems Canadian special forces soldiers are going to play a key role in training Kurdish fighters for the operation in Mosul, according to U.S. military officials.

MacFarland told him those expanded intelligence capabilities were what he needed to refine his plan to retake Mosul from ISIS, as well as having the Canadian trainers conduct training tailored for the operation, Sajjan said.

“Ther is an irony in that we and other are investing in the peshmerga and are actually aiding a separatist army,” says Bell. “But at this point, there is no alternative to that.”

Bell says the United States and its allies including Canada are putting tremendous diplomatic pressure on Barzani to persuade him not pursue full independence, that the Kurds will be better off with very wide autonomy inside a unified Iraq without the trappings of an independent state.

“Canada is committed to the unity and territorial integrity of the Republic of Iraq,” Tania Assaly, a spokesperson for Global Affairs Canada, said in a statement. “This position is well known to our Iraqi interlocutors, including in the Iraqi Kurdistan Region.”

Canadian officials are in close contact with the Iraqi authorities on the implementation of Ottawa’s new strategy, which will be carried out with the full consent of the Iraqi government, Assaly said.

For now, it appears Iraqi officials in Baghdad are happy with Canada’s role, but it remains to be seen whether their calculations change, once the threat posed by ISIS subsides.