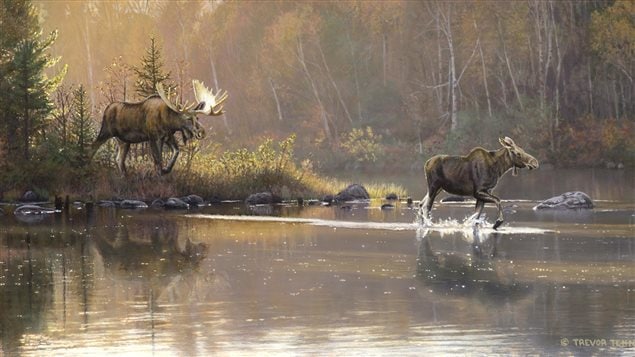 Ducks Unlimited Canada has chosen Trevor Tennant as the artist of the year for his painting of moose called “Shoreline Retreat.” Tennant is from Bobcaygeon, Ontario. He has designed commemorative coins for the conservation group as well as several coins for the Royal Canadian Mint.

The painting was chosen from more than 1,500 works as part of an art program to raise money for the conservation of wetlands. This National Art Portfolio has grown over the last 30 years. Throughout 2016 prints will be auctioned off at various events across the country. There is also a sealed bid auction online.

Ducks Unlimited Canada is a government-recognized charity that works with governments, industry, other non-profits and landowners to conserve wetlands important to waterfowl, wildlife and the environment.

Other artists chosen for the 2016 National Art Portfolio include: