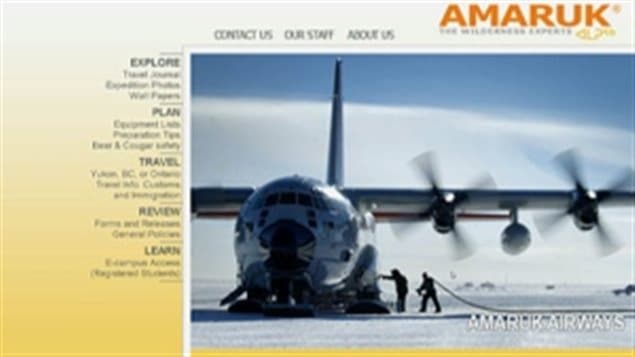 Amaruk claimed it was an international wilderness adventure company, This C-130 was promoted on its now closed website as being part of Amaruk’s available resources for its adventures. It turned out to be a reversed photo lifted from the US New York National Guard website, yet another of the strange claims made by this supposed wilderness company.
Photo Credit: via CBC

It is truly a bizarre story, and it continues to be bizarre.

This week the British Columbia Human Rights Tribunal awarded a claim to a woman who had filed a complaint against a company for religious discrimination.

In 2014, Bethany Paquette, a graduate of Trinity Western, a Christian university in British Columbia, applied for a job as a guide with Amaruk Wilderness Company. (Investigation by CBC and others led to speculation that this company and a number of other elabarate online companies/websites associated with its director living in B.C., did not actually exist)

This supposed Norwegian company responded in emails from a representative using the name Olaf Andersen, and later Cristopher Fragassi-Bjornsen saying she wasn’t qualified, but with additional bizarre and offensive letters to her explaining why she would not be hired including that company policy believed homosexuality was the best case scenario for a man, and referred to a heterosexual marriage to any B.C. woman as “emasculating.”

A Google plus account for the name “Olaf Anderson” of Amaruk, with his purported photo, actually shows a photo of Norwegian actor Kristofer Hivju who played “Tormund” in “the Game of Thrones” the popular HBO television series.

These stated in part that she was being rejected for her Christian beliefs, and her university’s, (Trinity-Western)  stance against same-sex relationships.

Ms Paquette filed a complaint in British Columbia with the Human Rights Tribunal against the company and director Christopher Fragassi-Bjornsen.

“Try and get any money from me” C Fragassi

At the tribubal hearing in November. Fragassi-Bjornsen, demanded that questions be asked in French, and that he be given a security detail, even though the tribunal noted, “Mr. Fragassi-Bjornsen demonstrated both during the discussion of preliminary issues and in his written submissions to the Tribunal over the course of this Complaint a clear competence in the English language”.

When his various requests were denied, he walked out stating he wouldn’t pay any award the tribunal ordered. The National Post reported he shouted, “Try to get your order, try to get any money from me”.

The tribunal continued without him, and  in it’s judgement the tribunal said although she was not qualified for the position, the company’s responses constituted “egregious” religious harassment.

Ms Paquette meanwhile is in now in northern Canada running dog sled tours, similar to the kind of work that Amaruk had said she was not qualified for.