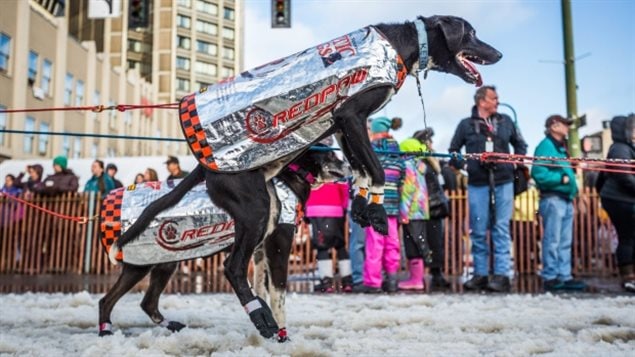 A dog in musher Ken Anderson’s team jumps in anticipation of the ceremonial start of the Iditarod sled dog race in Anchorage, Alaska, on Saturday, March 7, 2015. A lack of snow forced race organizers to ship in snow for this year’s start.
Photo Credit: Loren Holmes/Alaska Dispatch News/Associated Press

There’s the great Yukon Quest dog sled race, held in  February in Canada, and then in March, the American Iditarod across Alaska.

Both are around 1,600 kilometers in length.

The warm weather in the north has forced both races in recent years to make changes. Last year the official start had to be moved about 600km north to Fairbanks.

The Iditarod, is supposed to start in Anchorage, Alaska.  The ceremonial start for this 44th edition will be run through the city on March 5, while the official start is moved north about 60 kilometers to Willow, Alaska and will start on Sunday.

Because of warm temperatures in the north, most of the snow in Anchorage has melted, including extra piles set aside especially for the ceremonial run of about 18km through the city.

In fact a special trainload of snow has to be brought in from Fairbanks, and the ceremonial run through Anchorage will have to be shortened to only about 5 km.

About 85 mushers are signed up for the race which is equally as challenging as the Yukon quest and will take them through long stretches of difficult terrain, including two mountain ranges, the Yukon River and the wind-scoured Bering Sea coast to the old gold-rush city of Nome Alaska. Even there, snowfall has only been about a third of normal this year.

Several Norwegians and one Swede are also signed up.

The American Environmental Protection Agency (EPA)  has said that over the past 50 years, wintertime temperatures across Alaska increased by an average of more than 3.5 degrees Celsius (6.3 F), adding that it is primarily due to man-made climate change,