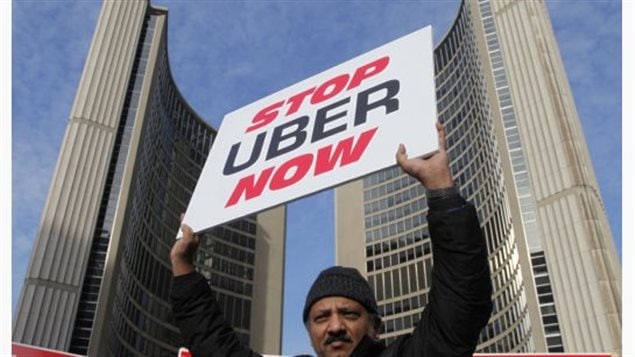 The “Uber Effect on Civil Society” was the title of a talk Montreal human rights lawyer Julius Grey, delivered on Tuesday evening at Concordia University.

Montreal, like many cities in Canada and around the world, has been the scene of some very heated protests by taxi drivers who are watching their livelihoods drain away due to the unreglated use of Uber’s ride share service.

Technology can get around regulation

For Julius Grey the major issue is “the ability of private forces, market forces, to get around public regulation.” He goes on to explain the origins of these trends: It has to do with the whole politics of neoliberalism, which in the 1980’s under Mrs. Thatcher and Reagan, deligitimated taxation, said that budgets had to be balanced, and turned free-trade, not into a possibility, because it is always a possibility, but into a religion.”

The fracturing of social and economic institutions

He takes on what he calls excessive consumerism. “We’re so concerned about consumer choice that we’re not worried about the effect on the worker or the producer, pople who have for instance taxi permits which cost several hundred thousand dollars, they’ve put their whole life savings into it, we bail out banks and so on, but we don’t bail out individuals.” He says consumerism has gone to far and there is a need now for a balance between the rights of the consumer and the rights of the producer.

He clarifies he is not against technology, but rather the neoliberal attitudes that glorify the market in opposition to social planning and social solidarity. As for Uber itself, Grey says the challenges are not insurmountable; the service can be regulated with compensation worked out for taxi permit holders. But he warns the trend will continue: “the constant use of technology to bring down important industries and increase profits for a few”, is the challenge.  What to do? “Stop paying lip service to the benevolent nature of the forces of the market… the invisible hand, which Adam Smith called it, is not always good.”