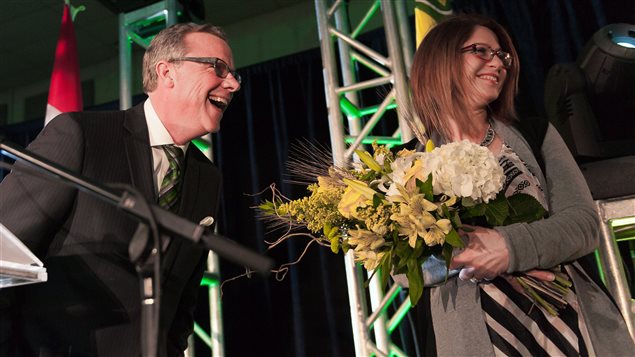 Brad Wall‘s win was not a big surprise in Saskatchewan’s provincial election yesterday, but a third majority mandate is causing other Canadians to take note.

“We’re going to work hard to earn what happened yesterday.”

Brad Wall, the leader of the Saskatchewan Party, a revised progressive conservative group, did not face much of a challenge from the opposition. The left-leaning New Democratic Party gained just two seats but the leader, Cam Broten, lost his seat.

Nelson Wiseman, professor in the Political Studies Department, and Director of the Canadian Studies Program at the University of Toronto, noted however, that Wall’s party may be decreasing in popularity considering the drop in the vote. At 57 per cent, which would be envied in many other political arenas, it is a significant drop from the 76 per cent turn-out for the 2007 election, when Wall first ran to be premier. This turn-out was the lowest in the province’s history.

“We’re going to work hard to earn what happened yesterday.” Premier-elect Brad Wall told reporters today. The win, with 51 seasts in the 61 seat legislature, leaves the representation lopsided, but so many of Saskatchewan’s fortunes are based on global resource prices.

The first challenge Wall faces is coming up with a budget when the province is carrying a billion dollar deficit. Saskatchewan has one of the lower populatons in Canada at 1.13 million people. Like its neighbour to the west, Alberta, Saskatchewan suffers from boom and bust economic realities.

At the moment, the collapse of commodity prices, has the provincial government trying to hold steady in anticipation of an eventual return to another boom in potash, or oil and gas, or even urnanium prices. And the evolution of wheat prices in the wake of the dissolution of the Canadian Wheat Board is for some farmers, still a work in progress.

One of the other challenges facing Brad Wall is the demand to improve the conditions of the province’s aboriginal peoples. Like Manitoba, to the east, Saskatchewan is one of the provinces with the highest per capita population of indigenous people. The impoverished conditions on so many reserves, the overwhelming representation in prison populations, and the inequality in education are all issues that can no longer be ignored.

Saskatchewan may be part of the growing solution to many of these historical wrongs. The First Nations University in Regina, the provincial capital, is the only post-secondary educational institution in Canada that specializes in indigenous knowledge and provides a culturally supportive experience for native and non-native students alike.

With the federal leadership race gaining momentum, many are looking to Brad Wall as a future contender on the national scene. For the moment however, he has his work cut out for him, living up to the campaign slogan of, “Keeping Saskatchewan Strong”.