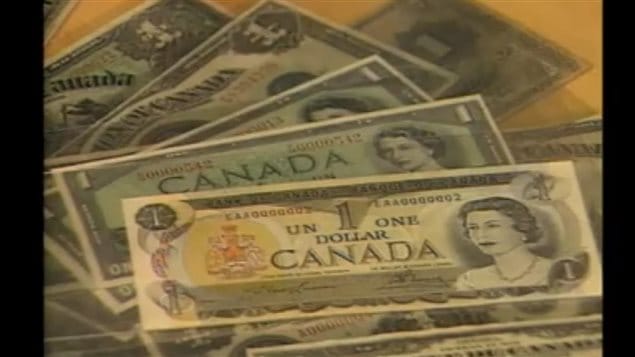 Canadian one dollare bills from first to last. Final printing was on April 20, 1989. They were already being replaced by the one dollar. a bronze coated nickel coin.
Photo Credit: CBC news 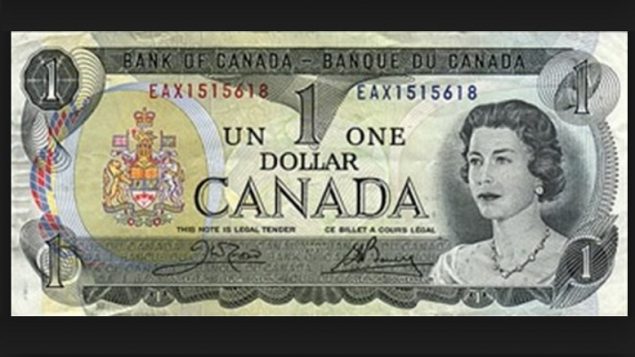 The 1973 series introduced more colours and intricate design as a way to combat counterfeiting.This was the image on the last run of the dollar bill.

Workers at the Canadian Banknote Company located in the capital, Ottawa,  wore black shirts on this day back in 1989.  It was the last print run of the Canadian one dollar bills.

The government wanted to switch to one dollar coins saying the coins lasted much longer and wouldn’t have to be replaced at anywhere near the same rate, so it would save the mint a lot of money.

The new one dollar coin had been in circulation for almost two years, and with it’s image of the iconic waterfowl the loon, quickly became known as a “loonie”. It was not immediately popular and the nickname not without a slight pejorative context, “looney” also meaning “crazy”.

To force the shift to the coin, the government decided to stop printing the one dollar bill on this day April 20, 1989 and would stop issuing them in June. The following month banks would begin instead to collect dollar bills in circulation and send them to the central bank for destruction.

Canadians were advised that saving their “dollar bills” as collector items hoping they would increase in value, was not going to happen as there were millions in circulation.

However, for sentimental value sake, people could buy uncut sheets of dollar bills for $50.  At least $3-million worth of the uncut sheets were sold.

The next to fall victim to “cost saving” would be the $2 note. That was announced in the 1995 budget speech, and the “Tooney” (twoney) coin was issued the following year