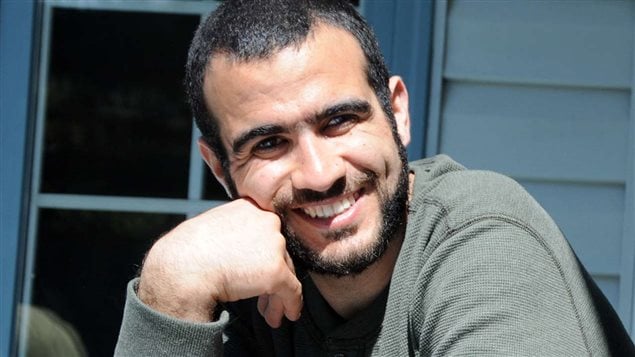 Omar Khadr is engaged to be married to Muna Abougoush, an Edmonton human-rights activist who worked for his release while visiting him in prison.
Photo Credit: CBC

Omar Khadr engaged to be married

“Omar became engaged and should be left alone to get on with his life,”

Edney sent a message to the Toronto Star newspaper, saying “Omar became engaged and should be left alone to get on with his life,”

Khadr, the 29-year-old former child soldier, is now out on bail and living at the Edney home in Edmonton, Alberta.

According to a post on Facebook, by someone who claims to be a friend of the couple, Muna Abougoush, a human rights activist, told her of their “upcoming engagement,” last week.

Abougoush, is a graduate of the University of Alberta and has long supported Khadr. She began visiting him in prison in Alberta when he was transferred there, and started the online campaign ‘Free Omar Khadr Now’.

In 2013 Abougoush confided to the Toronto Star she was “nervous” before meeting Khadr for the first time.

Khadr spent over ten years in both U.S. and Canadian custody, including at the Guantanamo Bay detention centre in Cuba.

“This case that everyone had been talking about for over a decade was about to become a real person,” she told the newsppaper then, adding she was impressed by Khadr’s resilience.

“It motivated me to spread his story and let people know he is not the monster that had been portrayed by some media. … Despite all he has been through, he maintains a positive attitude.”

Khadr was born in Canada, but his family, often described as the “First Family of Terrorism”, travelled back and forth between Scarborough, Ontario and Jalalabad, Afghanistan.

In 2002, when he was 15, he was severly injured in a firefight with American troops in Afghanistan. Khadr was accused of throwing a grenade that killed a U.S. soldier.

He was sent to Guantanamo Bay, where he was charged with war crimes before a U.S. Military Commission. He was vilified by many and defended by others, such as retired Lt.-Gen. Romeo Dallaire and peace activist Desmond Tutu, who both saw him as a child soldier.

He returned to Canada in 2012, under an international transfer treaty. In May 2015, an Alberta judge granted Khadr bail while he appeals his war crimes conviction.

In February, the federal government decided not to pursue an appeal of the Alberta court’s decision to grant him bail.