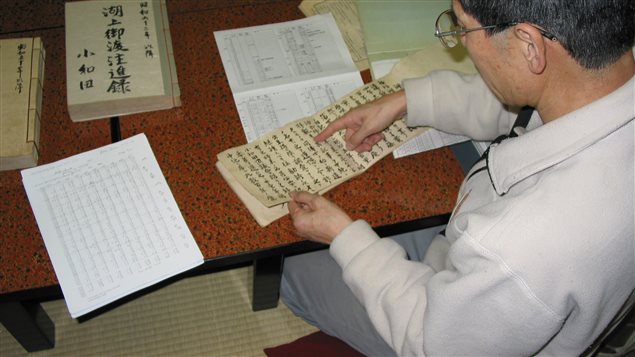 Shiinto Priest-Mr.Kiyoshi Miyasaki pointing out some of the records- hundreds of years old on lake ice conditions and the omiwatari. His data sheet summarizing the records are on the table.-(Nov-3-2005)
Photo Credit: -JJMagnuson

A vast multitude of scientific studies from all over the world have been showing rapid warming and climate change since the industrial revolution.

Now, an international research team has been poring over records of physical observations meticulously and continuously recorded over hundreds of years, which correspond to the science.

Biologist Sapna Sharma (PhD) is lead author of the research paper. She is an assistant professor  in the Department of Biology, Faculty of Science, at York University in Toronto.

The research was published in the science journal, Nature-Scientific Reports, under the title, “Direct observations of ice seasonality reveal changes in climate over the past 320-570 years”. (open access)

The international team of researchers co-lead by professor Shapna and John Magnuson of the University of Wisconsin, involved scientists from Canada, the US, Finland, and Japan.

The group said that most human collected climate data is fairly recent a matter of 100-200 years.

In their research what they came across was record-keeping by Shinto monks who in a mountainous region of Japan in 1442 began meticulously noting freeze and thaw dates of a nearby lake.

Halfway around the world in 1693, Finnish merchants also began meticulous record keeping of the ice break-up dates of their local river.

Records of ice conditions on Lake Suwa in Japan were related to a legend about a male god who crossed the frozen lake to visit a female god at her shrine.

In Finland, it was for more practical reasons as  ice conditions and break up on the Torne River were important to trade, transportation, and food acquisition.

According to Magnuson, ““Even though the two waters are half a world apart and differ greatly from one another,” he said, “the general patterns of ice seasonality are similar for both systems”.

Studying the Shinto records the researchers found an almost imperceptible change in the freeze date of the lake, getting later by 0.19 days per decade between 1493 and 1683.  With the advent of the industrial age, that change accelerated by a quite substantial rate, freezing at 4.6 days later per decade.

Even though half a world away, the records of the Torne River which creates part of the border between Finland and Sweden, was showing similar changes.

Records kept there show break-up of the ice  in spring advancing at double the rate with the arrival and growth of the industrial age during the last two centuries.

Extreme events are also far more common. Lake Suwa for example historically froze completely 99 percent of the time, but more recently, that occurs only half the time. Breakup of the Torne River would only extremely rarely occur in early May but now occur regularly in late April and early May.

In a York University article professor Sharma says “Our findings not only bolster what scientists have been saying for decades, but they also bring to the forefront the implications of reduced ice cover”. She adds, “The consequences of less ice span ecology, culture and economy. Decreasing ice cover erodes the ‘sense of place’ that winter provides to many cultures, with potential loss of winter activities such as ice fishing, skiing, and transportation.”

As a biologist she notes that less ice and warmer waters also lead to more algal blooms and impaired water quality.

The team plans to continue with further studies to determine ecological consequences of the changing climate on these two bodies of water.