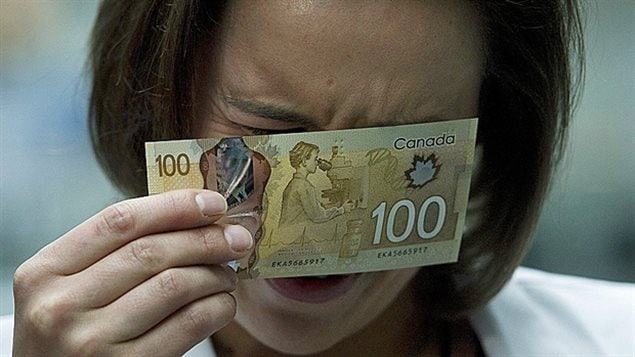 The Bank of Canada is conducting consultations to select ’an iconic Canadian woman’ to feature on the next Canadian bank note to be issued in 2018, Prime Minister Justin Trudeau announced earlier this year
Photo Credit: The Canadian Press

Candidate for a Canadian Banknote: Queen of the Hurricane fighter planes

In response to complaints that remarkable Canadian women have never(*) been featured on Canadian banknotes, Prime Minister Justin Trudeau announced this year, that a woman, or women will soon be featured.

The change will come with the next series of notes to come in 2018.

The woman, who will be featured on the first of the new series, “can be any Canadian woman, either by birth or naturalization, who has demonstrated outstanding leadership, achievement or distinction in any field”, according to Bank of Canada officials.

Ontario filmmaker Kelly Saxberg of Shebafilms, says a good candidate would be “Elsie MacGill”  known as “Queen of the Hurricanes”.

Elsie MacGill was featured in Saxberg’s film about women war workers at the Canadian Car and Foundry in Fort William in northern Ontario. The 1999 film was called “Rosies of the North” *

Elizabeth Muriel Gregory MacGill  known as Elsie, was a pioneer.  She  was the first woman in Canada to receive a degree in electrical engineering, and later became the world’s first female aircraft designer. In 1929, MacGill earned her master’s degree in aeronautical engineering from the University of Michigan.

Struck down by polio, she did not let that stop her, and took a  job at Fairchild Aircraft Ltd near Montreal in 1934.

Four years later she became chief aero engineer at the Canadian Car and Foundry Co.  With the arrival of war, the plant was given the contract to produce  Hawker Hurricane fighters.**

She led design and construction of the more than 1400 fighters built for the war effort by CanCar. Later when the U.S. entered the war, she also led work on the troublesome American designed Curtiss-Wright Helldiver. In fact she was featured in a special January 1942 comic book by True Comics in the US, where the called her the “Queen of the Hurricanes”.

Shortly afterward though, she opened her own consulting firm in Toronto, became technical advisor to the U.N. Civil Aviation Organization.

Later she went on to become a leading figure in the movement for women’s rights, and  was named to the  Royal Commission on the Status of Women in the 60’s. She continued in an active role for years afterward.

Elsie MacGill died in 1980, but served as an inspiration for generations of women, who saw her as breaking down barriers and old attitudes.  Kelly Saxberg thinks Elsie MacGill would be an excellent, and most deserving candidate to be featured on a Canadian banknote.

(*) It should be clarified that although many sources say women, or Canadian women, haven’t been featured on Canadian banknotes, this is not strictly true. For example: an image of the statue of the Famous Five (sufragettes) on the Canadian Journey Series $50 note; and on the 1935 series, Queen Mary (the wife of King George V) on the $2 note, their daughter Princess Mary on the $10 note, as well as Princess Elizabeth (who is now Queen Elizabeth II) on the $20 note.

* Women war workers called themselves “Rosies” after the American war worker “Rosie the Riveter”, The fictional character of the tough “Rosie” was developed for war work promotion in the US. What is little known is that the Americans basically took the idea from Canada where Ronnie Foster, a real female war worker had already been in use for promotional purposes, and known as “Ronnie the Bren Gun Girl”   see HERE

** While the Spitfire (with its famous elliptical wings designed by Canadian Beverley Shenstone) is the iconic  fighter of the Battle of Britain, it was in fact the Hurricane that fought the brunt of the battle.  Canada also produced thousands of training planes, along with the incredible Mosquito fighter-bomber, and the Lancaster bomber, the Canso amphib, Hudson, Noorduyn Norseman and many others, and developed the world’s largest aircrew training programme the BCATP.