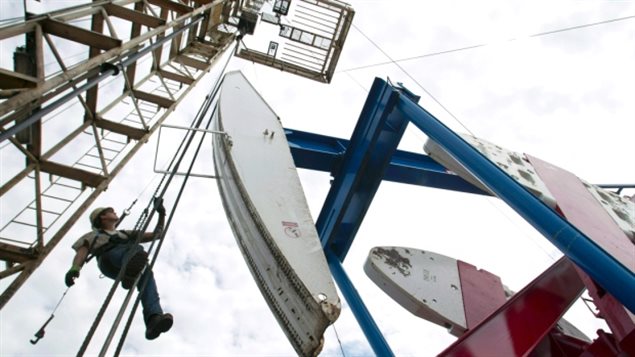 Temporary foreign workers, forced to flee due to the Fort McMurray fires, are now living in limbo as their status in Canada is directly tied to their job. Many are fearing deportation as advocates demand EI coverage and a loosening of the TFW visa requirements.
Photo Credit: AP / Gregory Bull

Temporary foreign workers have kept many businesses going in Canada, but abuses of both the workers and the programs, over the years, have put the spotlight on government regulations.

The federal government is launching a review this week in an effort to make improvements for the workers, many of whom live in fear and suffer exploitation while here.

The TFW program operates three different streams: one for those coming to work under the ‘Live-in Caregiver Program’, which, as it says, ususally means living in homes helping with either children or seniors. Then there are the “Temporary Foreign Workers” who can be employed in a variety of positions, from staffing fast-food restaurants, to working on construction sites, or in abbatoirs doing work it is judged Canadians don’t want to do. The third stream is for “Seasonal Agricultural Workers” who come annually from the Carribbean, Central America and Mexico, to pick fruits, vegetables and tobacco during the harvest.

A CBC investigation into the treatment of a seasonal agricultural worker from Jamaica, who had been coming to Canada to work for 12 years, revealed that more 800 migrant farm workers had been sent home in the last 10 years just in the province of Ontario alone. Many of them with medical conditions due to injuries sustained on the job in Canada.

“It’s worse than slavery… they dispose of them”

It’s classified as ‘medical repatriation’, and the family of Sheldon McKenzie, raised the issue after he died following a brain injury while harvesting tomatos in southern Ontario.

Unable to work following the injury, McKenzie lost his work visa and with it, the qualification for health-care coverage. His cousin, Marcia Barrett, hired lawyers to get him a humanitarian visa so he could continue getting the necessary medical care in Canada, care that would not be available in Jamaice. McKenzie had sugery to alleviate the swelling of the brain.

Barrett eventually succeeded in getting a temporary stay, but McKenzie died before a decision was made on the humanitarian visa.

“It’s worse than slavery… they dispose of them” Barrett told the CBC News investigative program, ‘Go Public’. None of this is news to Syed Hussan who works with the Coalition for Migrant Workers Canada. He says these employment abuses in Canada go back to the Chinese workers who built the railroads in the late 19th century.

“This is about a long-term exclusion of a particular group of people from basic rights,” Hussan says.

Chris Ramsaroop, a spokesperson with Justicia for Migrant Workers, describes the situation as a form of apatheid. “To be blunt, I consider this an apartheid system. Migrant workers live and work under a different set of legal rights and obligations than we do. We are not denied basic human rights, we are not denied health care. They are seen as disposable and temporary,” he said, in an interview with the CBC’s Rosa Marchitelli.

In Ottawa, the standing committee on human resources, skills and social development and the status of persons with disabilities will examine changes to the TFWP made by the Conservative government in 2014 following a series of the CBC’s Go Public stories.

This week, politicians will be looking at the Seasonal Agricultural Worker Program, which falls under the umbrella of the Temporary Foreign Worker Program.

Meanwhile hundreds of TFW’s who fled the fires in Fort McMurray, Alberta, are living in limbo as their work permits are tied to the jobs they left behind in the evacuation. If they are not working, they can be deported.

Syed Hussan is calling on the government to grant the TFW evacuees open work permits, allowing them to change jobs, at least in the short-term, and to extend Employment Insurance to them as well, as they don’t qualify under normal circumstances.

New penalties for employers who break the rules when hiring foreign workers come into force on Dec. 1. During boom times, Canada’s oil sector has been a major employer of temporary foreign workers. (Gregory Bull/Associated Press)