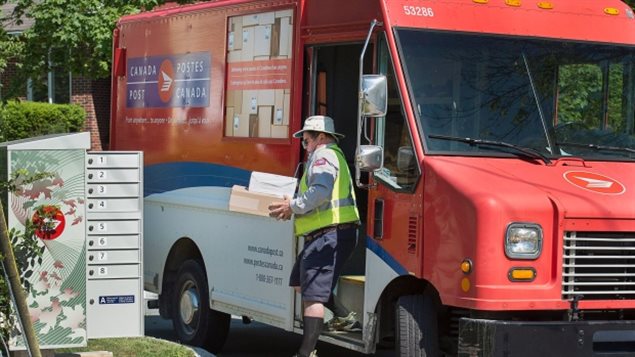 Postal workers contracts ended in late January. The federal agency Canada Post had extended the contracts, but says that will end this week and a lockout is possible meaning a halt in mail delivery in the country is possible by Friday.
Photo Credit: Andrew Vaughan/Canadian Press

Canada Post, the federal agency that delivers the mail in Canada has given a 72 hour notice it will be in position to lock out its workers. That could mean that as of Friday, mail deliveries could cease in Canada.

The Canadian Union of Postal Workers, (CUPW) for its part has a strike mandate from its workers but had not exercised that option.

After months of talks, on June 25 Canada Post offered a deal that it called a ‘fair and reasonable framework for settlements’, calling it final.

The union made a counter-offer on Monday, which was rejected by Canada Post as  being ‘not affordable’ as it would add $1-billion in costs over the life of the contract.

In reaction, Mike Palecek, president of the Canadian Union of Postal Workers. said “We knew this was their game all along. They are sabotaging the public review of the post office. They refused to negotiate fairly with us and now they ‘re locking the doors and will try to starve us into submission,”

The main issues are salary increases, but particularly pensions. Canada Post wants to change the pension plan for newly hired workers to a defined contribution plan, different from the current one defined benefit plan which guarantees a reliable payout every month.

The last work stoppage for mail delivery in Canada was in 2011, when after a ten-day period of rotating strikes and lockouts, the then Conservative government ordered back-to-work legislation.

The federal agency says it is suspending the collective agreement on Friday due to the union’s strike mandate, long drawn out negotiations and a changing business climate where mail volume is declining.

The union says it has been offering proposals to make the mail service even more profitable with improved service for business and the public. Union reps add they want to continue negotiating and would not file their strike notice.

In the event of a lockout or strike, essential mail like Old Age Security cheques, Canada Pension Plan, and other social benefit cheques would still be delivered once a month.