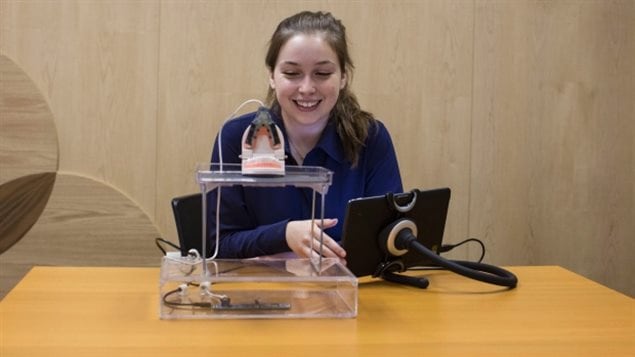 hat do you get when you mix really smart with really empathic?

But over the course of her final two years at White Oaks Secondary School in Oakville, Ont., she accomplished something extraordinary.

Mobilized when she realized that her friend Tim, a husband and a father who has ALS, was having increasing problems communicating verbally, Mogus created a device will could have a profound effect on Tim and many, many others with severe physical disabilities.

It is called TiC, or Tongue-Interface-Communication.

It has five buttons inside a mouthguard-type device that is connected to a computer. Each button controls a different mouse direction.

People suffering from ALS, multiple sclerosis, spinal cord injuries and other disabilities now have a real shot at joining the rest of us navigating the Internet or sending emails with a minimum of difficulty.

The award includes a $2,000 stipend, money that will go back into further development of the TiC as Mogus develops her fourth prototype.Creating the TiC is not Mogus’s first foray into helping others.

They have since shipped 115,000 books to communities across Canada and around the world, impacting the lives of 150,000 world-wide.

Emma, who has a summer job at McMaster University, which she will enter this fall, spoke to RCI by phone from her home in Oakville.