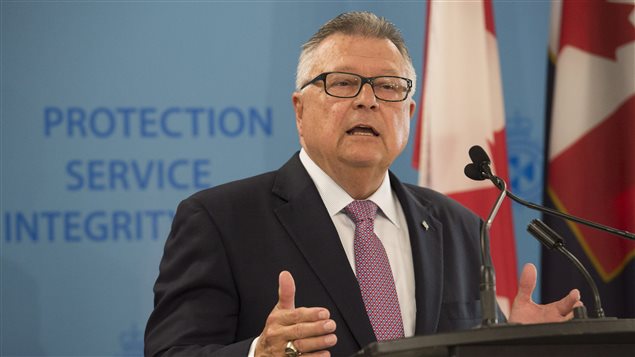 “Our objectives are, firstly, to increase the availability of effective alternatives to detention and thus reduce the overall number of cases in which detention is the only available technique to deal with those difficult problems of identification, flight risk or danger to the public,” Goodale said.

The government will also try to avoid housing children in detention facilities “as much as humanly possible,” Goodale said.

Ottawa also wants to enhance health and mental health services to those who are already detained.

There are also safeguards under the law to protect detainees held by the border agency, Goodale said.

“First, CBSA is required by law to consider all reasonable alternatives before detention,” Goodale said. “Secondly, every decision to detain an individual is subject to immediate and then periodic legal reviews.”

These reviews will be conducted by “dully appointed and properly trained” members of Immigration and Refugee Board (IRB), an independent tribunal focussed on immigration law, Goodale said.

“In reviewing the detention cases, the IRB has the full authority to release the individual or to identify future conditions for release, or to maintain the detention.”

According to the Canada Border Services Agency, there are, on average, 450 to 500 people who are detained at any given time under the Immigration and Refugee Protection Act, Goodale said.

The End Immigration Detention Network says 15 people have died in detention while in CBSA custody since 2000.

A Red Cross investigation in 2014 found numerous shortcomings at facilities for immigrant detainees, including overcrowding and inadequate mental health care.