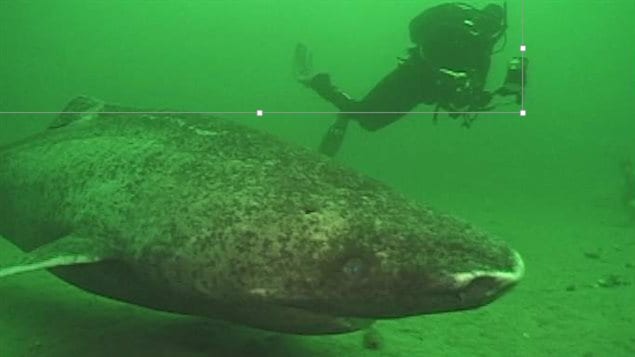 A new study confirms the belief that Greenland sharks are the longest-living vertebrates on earth. Researchers caught 28 of the elusive animals and estimated one female was about 400 years old.

Greenland sharks all over the world

“They are an amazing animal,” says Canadian Aaron MacNeil, a world-renowned expert of Greenland sharks, though not part of this particular study. “They live in very cold water. Primarily we see them in the Arctic because the cold water there is very shallow and they are caught in Greenland halibut fisheries there…

“But they probably exist all over the world in the deep ocean where water temperatures are very cold. They are quite a big animal. They are… four, five, maybe up to six metres long and not a whole lot is known about them.”

A Danish scientist caught and tagged some Greenland sharks in the 1940s and recaptured on in the 1960s and found it had grown a little more than seven centimeters. He extrapolated that the shark was more than 200 years old.

The new study used radio isotopes that rained down on the earth after nuclear bomb tests and lodged in the tissues of every living thing. By looking into the shark’s eye and studying the isotopes present they were able to get a more accurate picture of the animal’s age.

Cold may be the key

But how do Greenland sharks manage to live so long? “Very slowly,” answers MacNeil. He notes that the water they live in is about 5 degrees and it pulls the heat out of the bodies of living things, making them cold too.

MacNeil concludes by saying much about the Greenland shark remains a mystery.