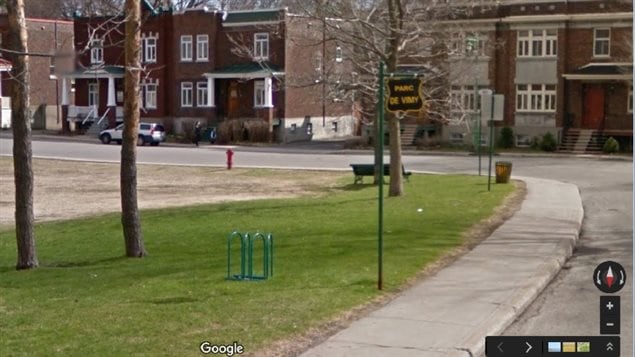 Vimy Park, a small greenspace in the Montreal borough of Outremont, will be re-named in honour of controversial separatist politician, Jacques Parizeau. On Friday Montreal said it wll find another park in a different borough to honour the WWI Canadian victory of Vimy Ridge
Photo Credit: Google streetview

Almost on the actual 100th anniversary date of the historic battle of Vimy Ridge, Montreal council announced that it intended to rename a small park changing it from honouring the battle to instead honour a controversial Quebec separatist politician. A month later, a vote made it official.

The decision outraged many across Canada.

This past Friday, council announced it will rename another park to honour the battle.

The First World War battle of Vimy Ridge marked the first time Canadian soliders fought as a single combined force, and not one spread out among other larger British formations.  Through detailed planning and innovative tactics the Canadians managed to take the heavily defended ridge where previous attempts by French and British forces had failed with massive losses.

In  1933 Montreal named the small park in the borough of Outremont in honour of the battle.  However, in this centennial year of the battle the city council voted to change the name to instead honour Jacques Parizeau, former Premier of the province of Quebec and leader of the 1995 campaign and referendum to create an independent state of Quebec separate from Canada.

On Friday, Montreal council said that a park in another borough, Notre-Dame-de-Grace, (NDG) will be re-named in honour of the Vimy battle.

While that may calm some of the controversy, it could depend on which park is chosen.

Christopher Sweeney, the chair of the not-for-profit Vimy Foundation, said that the group is happy another location to honour the pivotal Canadian victory will be chosen, but cautions that it should not come at the expense of stripping another historic name from a park.

Quoted by CTV news, he cited the example of Confederation Park, which he said is a historically significant name, “We don’t want to erase history here”, he said.

The NDG borough will recommend a location and a decision is expected in the fall.