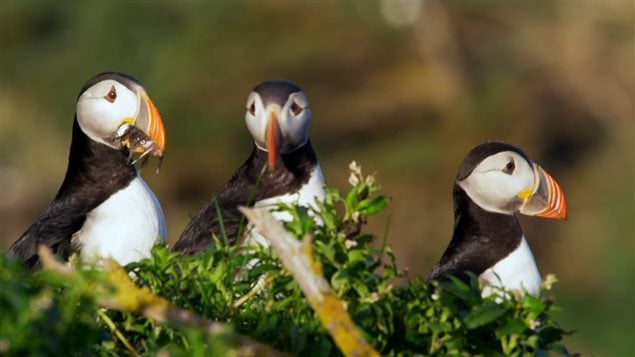 Note the puffin with a beak full of small fish. This year at least one major puffin colony had trouble finding food for their chicks which starved en-masse, A warming ocean is thought to have casued prey fish to move deeper or further away toward colder water.
Photo Credit: The Nature of Things- CBC

They are a quite distinctive seabird. Some 95 percent of Atlantic puffins breed around Newfoundland and Labrador,  and indeed are that province’s official bird. They do however have colonies all around Canada’s maritime provinces and in parts of the northeastern US and as far away as Scotland and Iceland.

But something has gone amiss in recent years.

Many colonies have been experiencing a variety of mishaps leading to large scale die-offs.

This year researchers noted that one large colony of about 5,500 pairs on Machias Seal Island has suffered a major die-off of their chicks.

It’s believed that the chicks starved to death.

The tiny New Brunswick island is located in the Bay of Fundy near the boundary with the US State of Maine.

Normally about 60 percent of chicks emerge from their burrows after  about six weeks, fledge and are later able to fly off the nest.

Tony Diamond, director of the Atlantic Laboratory for Avian Research at the University of New Brunswick, says this year only about 12 percent of chicks emerged, most dying of starvation in the nest. He says those that did survive were underweight, and still had down. He adds it is very doubtful any of this year’s cohort will survive.

As has been the case with other seabirds in the past, it is suspected that warming oceans are causing prey fish to go deeper or move further away.

Diamond says that puffins can live for 30 years and usually produce an egg each year, so a bad year like this is not necessarily a serious concern. However,  with disasters like this becoming more frequent throughout the puffin range, it could represent a more serious threat to the species.