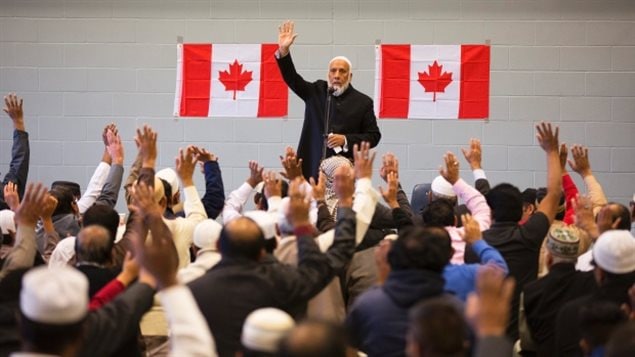 Muslim Canadians often feel pressured to affirm their patriotism in the wake of high-profile attacks committed in the name of Islam. Imam Syed Soharwardy and worshippers at his Calgary mosque were among the Muslims who publicly denounced the Oct. 22, 2014, shooting on Parliament Hill.
Photo Credit: Todd Korol/Reuters

Canada and Muslims: “They’re not the problem, they’re partners against radicalization,

A new survey of Canadian attitudes towards the Muslim community shows a slight majority see them as partners in the fight against radicalization, and not part of the problem.

However, the survey also shows a distinct desire for the Muslim leaders here to do more to denounce acts of terrorism.

Two domestic attacks,  the Parliament Hill shooting, and a hit-and-run vehicle killing of a soldier were identified by police as being motivated by violent political ideology related to Islam.

When Canadians were asked how they view the Muslim community and its leaders in light of those tragedies, 58 percent said the community and leaders were partners in fighting radicalization, while 42 percent felt the community was part of the problem.

In either case, a strong majority (73%) responded that Muslim leaders here were not speaking out enough against homegrown terrorism.

Another slight majority, just over 50 percent also believe there are radicalized individuals already in their communities or people in the process of becoming radicalized.

As for what people thought caused someone to become radicalized,  47 percent cited religion/culture,  37 percent cited mental illness,  and feelings of marginalization were listed by 34 percent of respondents

As to confidence in police ability to stop radicalized Canadians from carrying out acts of violence, the numbers were fairly, with

50 percent saying they felt confidence in police ability, while 43 percent said they were not confident the police can stop radicalized violence.

The survey was conducted by the Angus Reid Institute for Postmedia and the Laurier Institution (think tank) and the Canadian Race Relations Foundation.