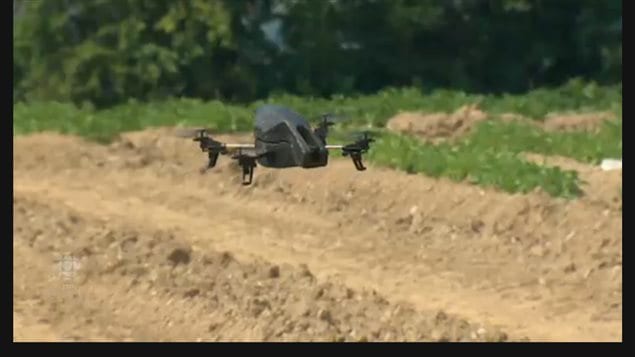 A Canadian-made drone (Resson) being used to analyze a potato crop in New Brunswick. The drone captures massive amounts of data from soil moisture to plant health. It can identify specific plants or areas that need attention saving time, resources, materials and costs, a more efficient method of farming and part of the coming digital revolution
Photo Credit: CBC

The federal government is injecting substantial money into research intended to spur development of new technologies in farm practices. The basic idea is to achieve greater yields from crops and farmed animals while at the same time reducing the environmental impact of farming.

The University of Guelph will become a Canadian and world hub for such development in the multi year project called  the “Food from Thought Initiative” which will look at using digital data to improve all aspects of farming and reduce waste.

The University of Guelph in southwestern Ontario has long been known as a leading academic and agricultural research centre.

It will soon be getting an almost 77 million dollar grant from the federal government to foster research in how to feed the growing world population, but do so sustainably and indeed reducing farming impact on the environment.

Professor Fraser says the additional challenges are to achieve that while maintaining or improving food quality and animal welfare standards, and do so at an economically competitive level.

Quoted in the CBC, Fraser says, “”We’ll have to cut back on waste. We’ll have to be more efficient with inputs such as water and nitrogen and fertilizer. We will have to be eating the kinds of food that are ecologically efficient to produce. That combination of strategies ultimately will allow humanity the flexibility to address climate change while feeding the world’s growing population.”

The University of Guelph will be the nucleus of the research and development effort but in collaboration with the Ontario Ministry of Agriculture, Food and Rural Affairs, Agriculture and Agri-Food Canada, the Canadian Food Inspection Agency, and several commercial food and sales companies.

While the emphasis is for Canadian farmers and the food industry, and in relation to various technologies to ensure export product quality professor Fraser points out that technologies developed in the Canadian context might not necessarily work in the social and physical realities globally. He does add however that the work will be of substantial interest in the global context in informing agriculture and agri-business debates at such forums as the United Nations, such as who owns new data and has access to it and in advancing farming practices and policies elsewhere in the world.

The ultimate goal is to make the University of Guelph a world centre in new and improved farming technologies.