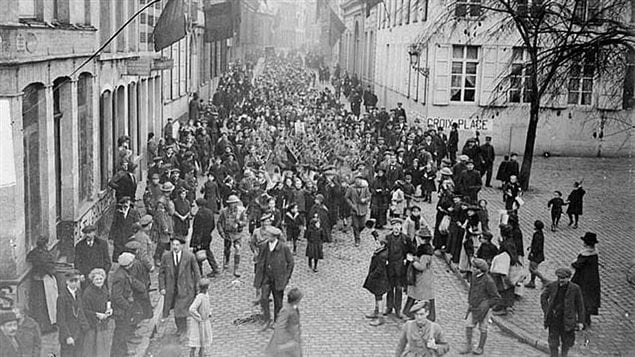 Belgium to erect a monument to Canadian George Price

George Lawrence Price was from Nova Scotia, but when the First World War broke out he was living in Moose Jaw, Saskatchewan.  It was there that he was conscripted in October 1917. He was within minutes of surviving the horrific slaughter of that war, when a sniper’s bullet felled him and tragically entered his name into history

The municipality of Le Roeulx Belgium is commissioning a statue to the Canadian soldier killed in the final moments of the war while liberating a small town.

“It’s important that your people … know what George Price did for us.” Bourgmestre Friart

By the end of September 1918, it became clear to German military leaders that they could not win the war, and might face a devastating defeat.  By early November the German political situation was in turmoil and a delegation was sent into France to negotiate an end to hostilities.

Meanwhile Canadian troops, which had won every objective they had been assigned in the last two years,were now feared by the Germans and had been used as the Allied shock troops in every battle in the last three months.    Almost everyone suspected the war would end soon, but orders were to continue to harass German forces. A controversial order came for Canadians to attack the Belgian city of Mons. On the 10th of November Canadians fought there way into the city and controlled it by the 11th. Over 200 were killed or wounded in those final days.

The Armistice had been signed in the early hours of the 11th and soon the word was being sent to all units to end hostilites at 11 oclock.

A group of soldiers from Saskatchewan’s 28th Battalion were now fighting in villages beyond Mons. They had been given orders to take the canal at Ville sur Haine even though the ceasefire would come in just a couple of hours. It is possible that a small group, including 26-year-old Private George Price, had not heard the news when they crossed the canal and entered a house on the other side which the Germans had just left. It was now only a few minutes before 11.  Stepping back outside, Price was fatally shot by a sniper from further up the street.  Though he lived for a few moments, he died at 10.58.  He was the last Commonwealth soldier to be killed in that war.

Fifty years afterward veterans of the 28th Battalion, along with a grateful town of Ville sure Haine, and the municipality of Le Roeulx erected a small monument and plaque to the man they consider to represent all the sacrifices of the liberating forces.

The plaque reads: To the memory of Private George Lawrence Price 256265 of the 28th North West Battalion, 6th Canadian Infantry Brigade, 2nd Canadian Division, killed in action near this spot at 10.58 hours, November 11th, 1918, the last Canadian soldier to die on the Western Front in the First World War. Erected by his comrades, November 11th, 1968.

An annual service commemorates him in the town and a school is named after Price as well as a bridge. Now they want to commission a statue of Price.

The goal is to have the statue completed and in place for the 100th anniversary of Price’s death in November 2018.