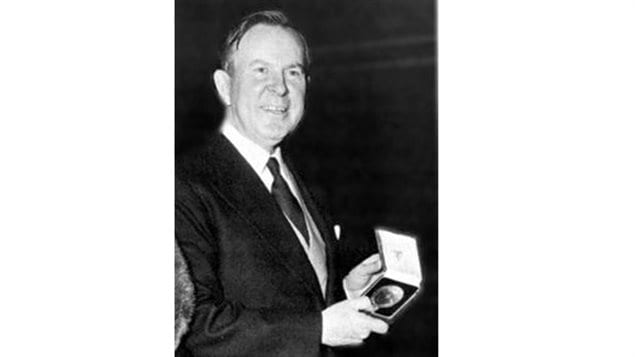 On this date in 1957, then Canadian external affairs minister Lester B Pearson received a telegram from Sweden.  It informed him of his being awarded the Nobel Peace Prize.

It was due to events of the previous year during the Suez crisis of 1956.  The United Kingdom, France, and Israel had invaded Egyptian territory after Egyptian President Gamal Abder Naser decided to unilaterally nationalize the Suez Canal .

The canal had been built and operated by an Anglo-French consortium in 1869 and was a vital route for trade to Europe, especially for oil.

The Egyption nationalization in 1956 was seen as a major economic and political threat to Britain and France. Although the canal continued to operate as before, the tolls now going to Egypt, Britain France and their Israeli ally began plotting a military response without informing its other allies like Canada and the US. Egypt meanwhile was being armed by the USSR. Israel moved toward the canal.  Egypt advanced its military, and soon Britain and France began a bombing campaign as the situation escalated with the potential to cause a rift in NATO between the US and Britain, and escalate into a much wider war.

This became known as the Suez Crisis.

A former president of the U.N. General Assembly ( 7th session), Canada’s Lester Pearson sought to defuse the crisis by proposing a resolution to create a United Nations Emergency Force (UNEF) to occupy and police the area, allowing the invading nations to withdraw with a minimum loss of face. No one really wanting to start a major war with the results of WWII still so fresh in everyone’s mind.

Canadian is the father of peacekeeping

This proposal for a neutral UN military force and the subsequent troops to occupy the middle ground between the two sides became the precursor to the concept of the blue berets, the idea of multinational UN Peacekeeping forces, thereby making Lester Pearson the father of international peacekeeping.

It should also be noted that Lester B (Mike) Pearson wrote the speech for Canada’s then Prime Minister Louis St Laurent in proposing the establishment of NATO. He later headed the Canadian delegation to NATO, and chaired the NATO council in 1951-52.

In fact, Pearson had been involved in the 1944 and 1945 process to create the United Nations itself.

Later elected as Prime Minister of Canada during two minority governments from 1963 to 1968, Pearson’s government introduced such social measures as universal healthcare,  student loans for higher education, the Canada Pension Plan, the award for outstanding service to the country, the Order of Canada, and the current Canadian Maple Leaf flag, ( now one of the most recognizable symbols in the world).

As an aside, the telegram informing Pearson of his award for the Nobel Peace Prize was initially delivered to the wrong house. Pearson meanwhile was unaware that he had even been nominated for it. Upon receiving it, he told reporters, “”Gosh, I am thunderstruck and overwhelmed,”