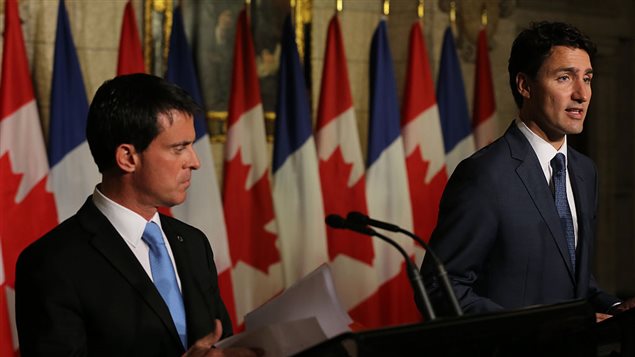 Prime Minister Justin Trudeau warned the European Union that its failure to ratify a free trade deal with Canada will undermine the block’s “usefulness.”

In a strong-worded rebuke to opponents of the Comprehensive Economic and Trade Agreement (CETA) delivered during a joint press conference in Ottawa with French Prime Minister Manuel Valls, Trudeau said “it’s time for Europe to decide what is the European Union for.”

Trudeau, who is expected to formally sign the trade deal during an EU-Canada summit in Brussels on Oct. 27, said Canada and its European partners, such as Germany and France who champion the deal, “have made a number of improvements to the agreement” and have “responded to concerns” to make it more palatable.

“And if in a week or two we see that Europe is unable to sign a progressive trade agreement with a country like Canada, then with whom does Europe think it could to business in the years to come in this post-Brexit situation when there are many questions about Europe’s usefulness?” Trudeau said speaking in French.

“If Europe cannot manage to sign this agreement, then that sends a very clear message not just to Europeans but to the whole world that Europe is choosing a path that is not very productive either for the world or for its citizens, and that would be a shame.”

Trudeau’s warning to the EU – his strongest to date – delivered in the presence of the French prime minister, who is in Canada on an official visit to discuss CETA among other things, signalled the government’s growing frustration with opposition to the free trade deal in certain EU countries, particularly Austria and Belgium.

The comments came as Germany’s highest court cleared the way on Thursday for Chancellor Angela Merkel’s government to approve the controversial trade deal between the EU and Canada.

The decision by the Constitutional Court boosts the chances that the EU and Canada will formally sign CETA during Trudeau’s visit to Brussels in two weeks.

The EU-Canada summit would then launch the ratification process with all of the EU’s 28 national parliaments as well as the Canadian parliament having to agree to the accord, which would eliminate 98 per cent of tariffs, allowing the free flow of goods and services between Canada and EU member states.

Opponents of CETA had appealed to the high court to stop the German government from approving the agreement at a meeting of EU trade ministers next Tuesday, ahead of Trudeau’s visit.

German Vice Chancellor and Economy Minister Sigmar Gabriel, who has championed the pact as Europe’s best chance to shape the changing rules of global trade, said the ruling paved the way towards ratifying CETA.

“I am very pleased that we have made a first big step, because if Europe were not able to deal with Canada, this would send a difficult signal in the world,” he said.

The court, however, said the government must ensure that only parts of CETA within the competence of the EU, such as the removal of tariffs, should be allowed to apply provisionally – meaning before the entire agreement is ratified by each EU member state.

The court also ruled that the German government must reserve the right to unilaterally withdraw from the deal altogether if the federal parliament fails to ratify it.

Maude Barlow, the chairperson of the Council of Canadians, a non-profit citizens’ advocacy group that has campaigned against the free trade deal, told RCI she was “pleased that the serious concerns of millions of citizens were taken seriously.”

“We do not see this ruling as a loss at all,” Barlow wrote in an email. “Of course the court cannot dictate policy on trade in a way that stops a deal promoted by governments. But it did put huge roadblocks in the way of implementation especially on provisional application and Investor State not being included.”

The ruling means that a system of investor protection also envisaged in the deal – which opponents say gives too much power to multinational companies to sue governments for policies they don’t like – may come into force only after ratification by national parliaments.

An analysis of the German court decision published by a coalition opposed to CETA and TTIP, a much larger deal being negotiated by the EU and the United States, argued that ruling excludes five areas from provisional application: investment protection, portfolio investments, international maritime transport, mutual recognition of vocational qualifications, and protection of labour rights.

The court is expected to issue a more detailed ruling in the future.