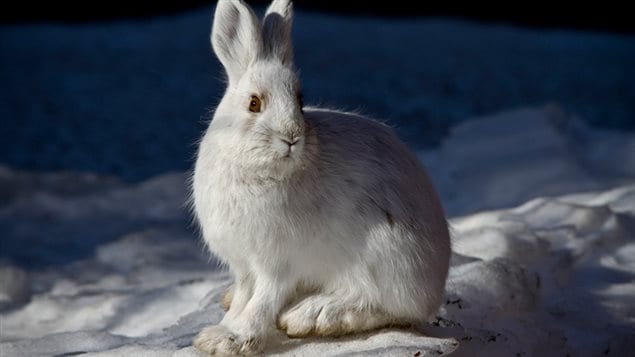 Because many other prey animals become difficult to hunt or hibernate in winter, the snowshoe hare’s role as a prey animal in the ecosystem becomes critically important in winter. If population numbers drop, it would likely have a negative affect on owls and many other species.
Photo Credit: Denali National Park and Preserve licensed CC BY 2.0 (via CBC)

It seems climate change could throw the delicate natural balance of predators and prey, off kilter.

Two biological mathematicians studied the relationship between a predator, the great horned owl, and a prey animal, the snowshoe hare.

Lead author Rebecca Tyson of the University of British Columbia told CBC radio that, “just by increasing the length of the summer relative to the lengths of the winter, a previously stable predator-prey relationship could become unstable — driving one species extinct”.

Research supervisor Frithjof Lutscher is a professor in Mathematical Biology Ecology and Evolution in the Department of Mathematics and Statistics at the University of Ottawa.

The hare as it turns out, is a keystone species for the reason that so many different predators in an ecosystem rely upon them. One of those species is the great horned owl. They keep each other in balance.

But when something like climate change, which is happening rapidly, changes one of the equation variables, what effect or effects might that have?  That’s what the researchers studied.

The findings were published in the  November issue of the science journal, The American Naturalist under the title. “Seasonally Varying Predation Behaviour and Climate Shifts Are Predicted to Affect Predator-Prey Cycles”. (abstract here)

One aspect they discovered was that just the fact of a warmer climate, and thus a slightly shorter winter, would throw the normal roughly ten-year swings in populations between hare and owl out of whack, and the hare population could become extinct.

A longer summer meant owls could catch hares and other types of prey longer, leading to greater owl numbers. In turn more owls could eventually wipe out their substantial summer, and main winter prey, the hares.

In other words, what they found was that the normal mild population oscillations of the two species, could lead to surprisingly big oscillations with the slight change of just a little longer summer with a little shorter winter. Or alternatively another scenario showed the slight temperature modification might mean the natural oscillations could instead greatly flatten out.

However, nature is an interconnected web, and looking at one very specific aspect likely does not give a proper picture.

The next phase of research will throw another variable into the mix, the more specialized snowshoe hare predator, the lynx, As the lynx depends far more on the hare, it potentially could suffer even more from a hare decline than the owls.