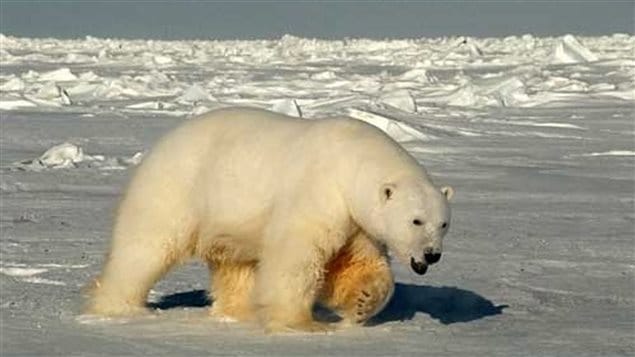 A male polar bear is one of many creatures of the Beaufort Sea, part of which will be protected by the Canadian government.
Photo Credit: Steven C. Amstrup, USGS/Associated Press/2009

Calling it a highly ecologically productive area and home to many marine species, the Canadian government announced the creation of a new Marine Protected Area in the Beaufort Sea. The area measures 2,400 square kilometres and is near the arctic community of Paulatuk in the Northwest Territories.

A news release announces that activities will be limited in the area except for some which are “vital for the long term prosperity of the local community, such as navigation activity and dredging for the purpose of resupplying goods to the community.”

Objectives based on indigenous traditional knowledge

The new site is called the Anguniaqvia niqiqyuam Marine Protected Area and is home to creatures like Arctic char, cod, beluga whales, polar bears, ringed and bearded seals and many kinds of birds. This is touted as the first Marine Protected Area created with conservation objectives based specifically on indigenous traditional knowledge.

This area will help the Canadian government in its effort to protect five per cent of its marine and coastal areas by 2017, and 10 per cent by 2020.

The non-governmental organization, Pew Charitable Trusts applauded the creation of the new protected area, saying it was a big step toward advancing marine conservation in the Arctic.