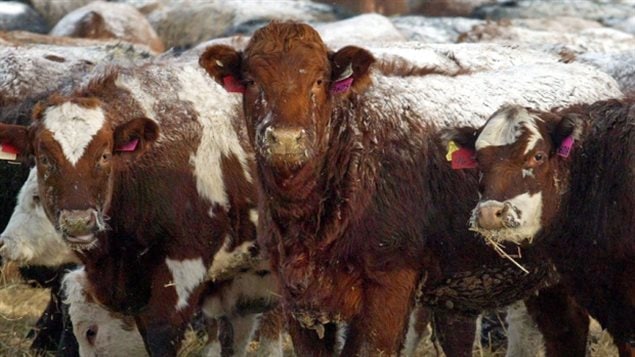 Canada’s beef and pork producers are taking a wait-and-see attitude in reaction to US President elect Donal Trump and his comments about renegotiating NAFTA and possibly reinstating COOL.
Photo Credit: Jeff McIntosh/Canadian Press

A memo obtained by the US television network CNN, suggests the incoming administration of  U.S. President-elect Donald Trump will take a hardline stance on the North American Free Trade Agreement (NAFTA).  This would be within the first year of taking office.

There have already been concerns about what that might mean for the softwood lumber industry in Canada which supplies a substantial segment of the US market.

Now another long running trade dispute is possibly back on the table. The United States instituted “country of origin labelling” on meat products (COOL) in 2009. Claiming it was a discriminatory trade practice, Canadian producers launched a multi-year battle against COOL under World Trade Organization rulings. Canada won every round in that dispute against the practice and the WTO ruled that Canada was harmed and could institute trade retaliations at just over a billion dollars per year.

Last year COOL was repealed but with talk coming from the US of a much tougher position on trade, many are concerned about the implications once again.

As such, Canada under the previous Conservative government  did not impose any retaliatory tariffs on U.S products. A spokesman for Canada’s current Liberal trade minister said only that the Liberal government looked forward to working with the incoming US administration and Congress.

John Masswohl is the director of government and international relations for the Canadian Cattlemen’s Association (CCA)  which represents 68,500, beef farms and feedlots.

He says they’re presently taking a wait and see attitude, but would urge quick retaliation from Canada if the US imposes further impediments to Canadian product.

Quoted by Reuters he says, “We’re watching … and if we think it discriminates against our cattle, our recommendation is going to be that tariffs go into place immediately”.