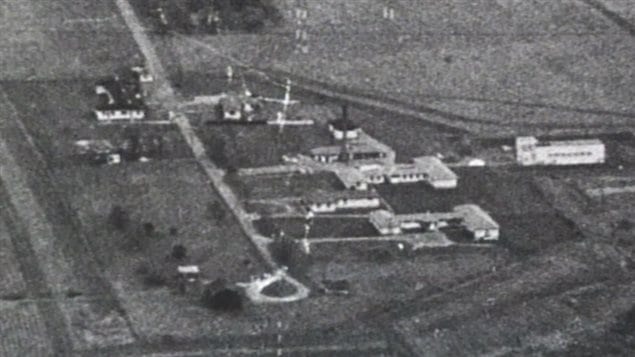 Period photo of the secretive Camp X which trained Allied spies from Canada, Britain and the US who were later sent on extremely dangerous missions in theatres around the world. It opened on Dec 6, 1941
Photo Credit:

The small isolated farm in southern Ontario was the perfect spot.

It had everything that was needed; lots of room far away from any neighbours and curious eyes and ears, the lake and shoreline for practice landings and other activities, about 280 isolated acres for weapons and explosives training, low-level parachute drops, etc. And yet it was only a short car drive from the major urban centre of Toronto, and about 50 kilometres across the lake to the US. It was also conveniently not far from Canada’s largest munitions factory, Defence Industries Ltd in Ajax, Ontario.

It was the allied training camp for spies.

Known by various names, the unofficial name and most common name is Camp-X.

Canadian Sir William Stephenson was the senior officer of British Intelligence for the western hemisphere at the time. Code named “Intrepid” and also known as “the quiet Canadian”, he was tasked by British Prime Minister Churchill to set up the British Security Coordination. This was to enable intelligence to be shared between the US and Britain, and help convince the Americans to enter the war.

Another task was to develop a training school for spies. The location was a farm on the edge of the town of Whitby, near Toronto.

Specially selected people were to train in all kinds of clandestine and spy operations, from language training, to hand to hand combat, weapons, codes, assassination, demolition, deception etc.  Camp X also became a vital international communications centre.  That latter role, code-named Hydra, continued as spy training was phased out in 1944.

Camp X and the Cold War

Camp X also became famous as the place where Communist informant Igor Gouzenko was hidden for two years. It was his defection in 1945 that started the Cold War

By war’s end, between 500 and 2,000 British, Canadian, and American agents had been trained (figures vary) and sent abroad for extremely dangerous tasks in all theatres of the war.  Their efforts undoubtedly helped in many ways to win the war.

It was also the training of American agents, that helped the Americans to create the CIA out of the then OSS- (Office of Strategic Services).   Some of the agents went on postwar to become  directors of the future CIA.

One British agent was Ian Fleming who stayed in Toronto for a few weeks while travelling to the spy school. Earlier two separate churches, St James Presbyterian, and the Bond Congregational church had unified to become the St James Bond United Church. Fleming’s travels would have taken him past the church regularly. Of course he later went on to write the highly successful James Bond 007 books, which he said were loosely based on the character of Canadian Sir William Stephenson.

The church unfortunately was torn down in 2006 and only the façade remains for a retirement home.

As for Camp X, all that remains of this crucial spy school, its farmhouse, transmitter, antennaes, coding-decoding, barracks, and other special buildings, is an empty field, a small discreet monument and a couple of flag poles.