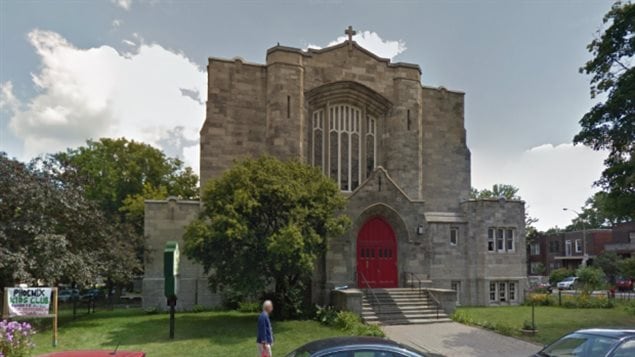 Trinity Anglican Memorial Church in Montreal will close in 2017 at a date yet to be determined. Trinity was built in 1922 and officially opened in 1926. It was dedicated as a memorial to soldiers who died in World War I
Photo Credit: Google streetview

In the news this week, a large well-known church in Montreal will close and be offered for sale. Trinity Memorial was built to accommodate 1,000 people, but as the number of parishioners has diminished the Archdeacon says the costs of maintenance, “is beyond their capacity to maintain”.

In Windsor Ontario, another church is set to be torn down. Originally built in 1922, with additions in 1955, city council has approved its demolition to be replaced with housing.

Melanie Paul Tanovich had wanted to purchase the church and hall for a music and dance studio but was turned down. Quoted in the CBC she said, “”It’s a great shame,” Tanovich said after the vote. “The structure has been confirmed by highly respected professionals. It’s beautiful inside. There’s an ambience that just can’t be appreciated unless you stand in it”. It seems destined to make way for a housing development.

All across Canada, churches are being abandoned and sold, the historic buildings are often then torn down.

It seems membership in traditional Christian churches is declining. The Anglican church for example went from  a high of over 1,360,000 parishioners in 1964 to less than half by 2001 at 641,865.

In 2003, in the province of Quebec, some  2,751 places of worship were identified by Quebec’s Religious Heritage Council. Since then 400 have closed. Quoted by Post Media, Council project manager Denis Boucher says the rhythm of closures is increasing, “A church closes every week. It is a huge phenomenon”.

While Christian churches are being closed in Canada due mainly to diminishing congregations, the influs of newcomers means many other religious communities are growing in Canada.

While many churches have been torn down to make way for other uses, such as condos, in some cases, when a Christian church is put up for sale, it will be saved and converted to another religion.

As one Windsor resident said regarding St George’s, “Once a building is gone, you can’t get it back”.