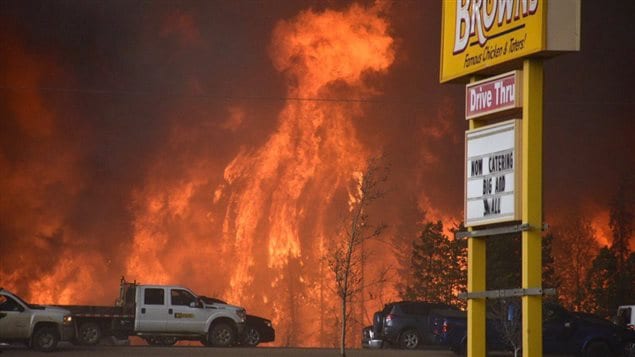 A wall of fire rages outside of Fort McMurray, Alta. Tuesday May 3, 2016. Raging forest fires whipped up by shifting winds sliced through the middle of the remote oilsands hub city of Fort McMurray Tuesday, sending tens of thousands fleeing in both directions and prompting the evacuation of the entire city.
Photo Credit: PC / Terry Reith

It was dubbed “the beast” and when it ripped through Canada’s oilsands capital of Fort McMurray  in northeastern Alberta destroying thousands of homes in early May, nearly 90,000 residents fled its fiery rage.

And now a Canadian Press annual survey of newsrooms across the country has picked the Fort McMurray fire as the top news story of 2016.

The wildfire, which at one point forced the near-complete shutdown of much of Alberta’s oilsands production, garnered 39 of the 67 votes cast by senior editors, said The Canadian Press. It was followed by Canada’s ongoing resettlement of Syrian refugees with 11 votes, the fentanyl crisis with six and the Tragically Hip’s farewell tour with five.

“Not even a Hollywood script could match the terror, uncertainty, and heroism to come out of what seemed to be a surreal event,” wrote Dave Barry, news director of CKPG TV in Prince George, B.C.

The fire began in a remote forested area southwest of the city on May 1 during a spell of unusually hot and dry spring weather. By suppertime on May 3 the flames jumped the Athabaska River and breached the city limits, forcing the complete mandatory evacuation of Fort McMurray.

People fled from their neighourhoods with forest ablaze on both sides of the road and ash raining down. They crawled bumper-to-bumper along Highway 63 – the only route out of town.

Despite some very close calls, everyone escaped the wildfire unscathed, though two teenagers were killed in a highway crash south of the city.

All told, the fire consumed some 2,400 buildings, most residential, but firefighters managed to save most of the city’s municipal infrastructure.

Life is slowly returning to normal in the town that was already hit hard by the downturn in the oilpatch.

Residents started coming back in early June. The majority returned to unscathed homes, but many had nothing but piles of ash inside blackened foundations.

Erin O’Neill, operations manager with the municipality’s recovery task force, told The Canadian Press 350 rebuilding permits have been approved since the fire and 160 new homes have begun construction.

However, seven months after the fire, many residents are still struggling with their insurance claims. The Insurance Bureau of Canada estimates that the Fort McMurray fire was the costliest insured natural disaster in Canadian history with about $3.77-billion in claims as of mid-November.

“Not only did the fire devastate a wide swath of Alberta but its aftermath had a negative economic impact that continues to ripple across the Canadian economy,” Paul Samyn, with the Winnipeg Free Press, told The Canadian Press.

Within six month of the fire, the Red Cross raised $319-million between donations and matching government funds – the largest domestic appeal in the organization’s history, vice-president Jenn McManus told.

Based on reporting by Lauren Krugel, The Canadian Press